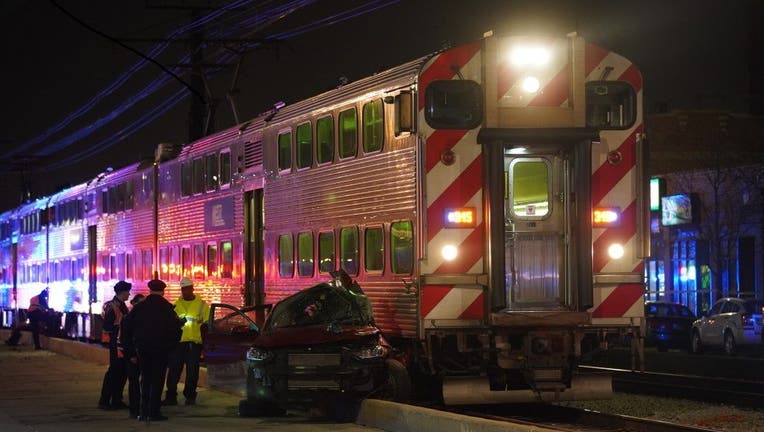 CHICAGO - Four people, including a child, were hospitalized Tuesday after a Metra train struck a car in South Shore.

Metra Electric train 345 hit the car about 9:15 p.m. in the 7100 block of South Merrill Avenue, a Metra spokeswoman said.

All four people went to the University of Chicago Medical Center, Chicago fire officials said. Three were in serious-to-critical condition, and another was in fair-to-serious condition.

Brandon Pendleton, who was leaving a nearby store when he saw the crash occur, said the car was “trying to beat the train” as it turned onto Merrill Avenue. The train struck the car and pushed it halfway down the block.

Pendleton and others helped to remove four people from the car. One of the four who was injured was child who appeared to be three or four years old, Pendleton said.

Jason Rainey, a man who lives nearby, helped remove the driver, a man who appeared to be in his late 20s. The driver asked Rainey to use his phone, walked a short distance away and then used it to call an Uber.

“I found him and said ‘Hey can I get my phone back,’ and he gets kind aggressive but gives it back,” Rainey said. “Then I get a call from Uber saying ‘you canceling your trip?’”

The man limped away, Rainey and Pendleton said, and it was unclear whether he got into an Uber or whether he was taken to a hospital by paramedics.

Earlier Tuesday, a person was critically injured after being hit by a Metra train in South Shore.