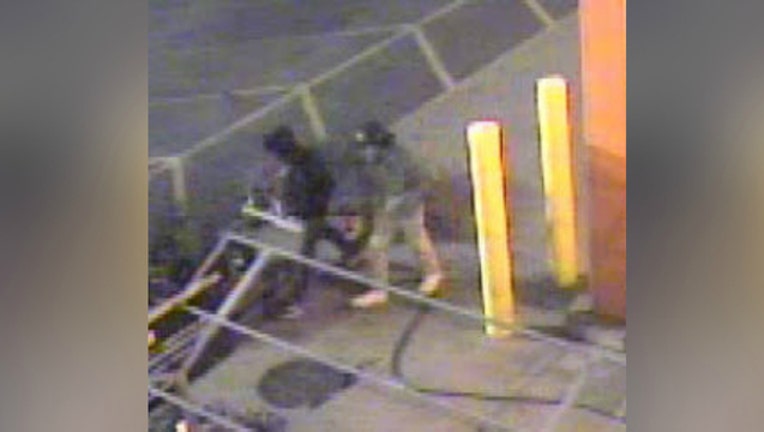 Surveillance image of suspects in the theft of a vehicle that might have been used in a string of Waukegan robberies. | Waukegan police

Police took four juveniles into custody for questioning about 3 p.m. Friday, after officers found them inside a stolen 2003 black four-door Lexus GX470 near Archer and George avenues that was believed to be involved in the robberies the day before, according to Waukegan Police.

The SUV was reported stolen from a Home Depot at 2001 Belvidere Road Wednesday, police said.

The three robberies were reported in a three-hour span Thursday afternoon and each of the robberies involved masked men.

In the first robbery, a “juvenile victim” was walking home from school at 3:30 p.m. near Butrick Street and Catalpa Avenue when four masked males approached, according to Waukegan police. The victim dropped personal items and ran away.

The suspects were described as white males who exited a black van, police said. No weapon was shown.

The next robbery was reported at 6 p.m. near Brookside Avenue and Edison Court, according to police. Multiple masked suspects exited a black SUV and pointed a gun at an adult victim. The victim handed over cash and other items, and the suspects left in the SUV.

About 20 minutes later, a group of masked suspects exited a black SUV at Butrick Street and Lucia Avenue, approached another adult victim and pointed a gun, police said. The victim handed over personal property and the suspects drove off in the SUV.

No injuries were reported in any of the robberies, police said. The suspects in both armed robberies were described as a group of masked Hispanic males.

It is not yet clear if the four who were found in the stolen SUV Friday were involved in the robberies, police said.