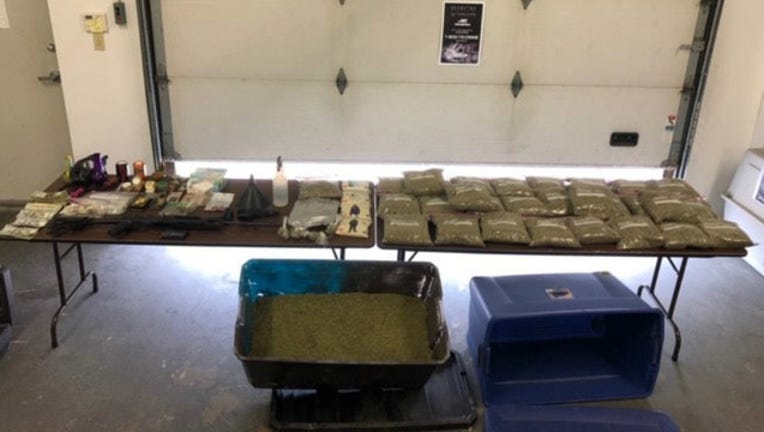 Officers found 940 grams of synthetic marijuana, chemicals used to manufacture the drug, two guns and nearly $3,000 in cash during a search of a home Thursday in Portage, Indiana. | Portage County sherif's office

PORTAGE, Ind. (Sun-Times Media Wire) - Two people are facing felony charges after officers found more than 60 pounds of synthetic marijuana and a pair of guns during a search of a home Thursday in northwest Indiana.

Earlier this month, law enforcement officials received a tip that synthetic drugs were being manufactured and sold at a home in the 5600 block of Carnation Avenue in Portage, the sheriff’s office said.

During a search of the home Thursday, officers and DEA agents uncovered 64 pounds of synthetic marijuana along with 940 grams of “synthetic chemical compound” and evidence of several gallons of acetone, which are used to make the drug, the sheriff’s office said. They also found a stolen Ruger Mini-14 rifle, a Glock 37 pistol and $2,955 in cash.

The sheriff’s office warned that the “highly volatile” chemicals used to make synthetic marijuana — also known as “spice” or “fake weed” — can “create a health and environmental hazard.”

Last spring, four deaths were linked to the use of synthetic marijuana, the Illinois Department of Public Health reported at the time. Symptoms included coughing up blood, bloody urine, a severe bloody nose, bleeding gums and internal bleeding.

On Jan. 1, all forms of synthetic cannabis were added to the Illinois Controlled Substance Act under a new law. The move bolstered a law that went into effect eight years earlier banning synthetic marijuana.

Just over a year later, a similar law went into effect in Indiana.