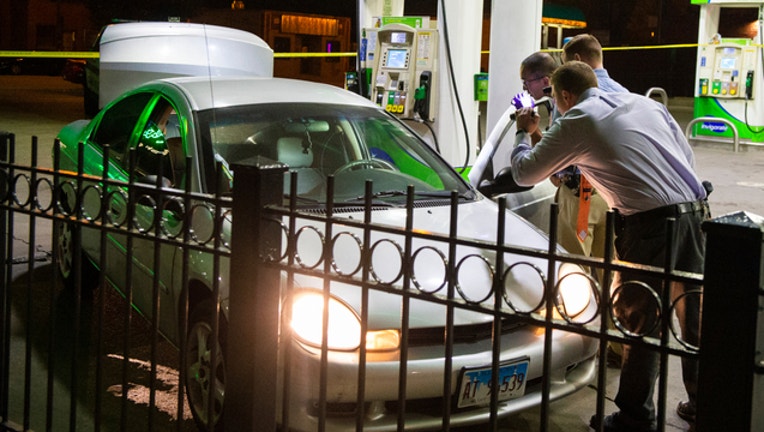 Police investigate a vehicle where a 18-year-old driver was shot Monday night in the 3100 block of West North Avenue. The shooting took place when the vehicle was traveling on the 2300 block of North Kenzie. | Tyler LaRiviere/Sun-Times

CHICAGO (SUN TIMES MEDIA WIRE) - Eight people, including three teenagers, were wounded by gunfire between about 2:20 a.m. and 11:30 p.m. Monday in shootings across the city.

The most recent shooting is believed to have unfolded about 11:30 p.m., according to Chicago police.

A 19-year-old man said he was shot in the chest but was too intoxicated to notice the wound, police said. About 5 p.m. Tuesday, he walked into Roseland Community Hospital at 45 W. 111th St.  and said he was shot the previous night and was hanging out on the West Side.

Another shooting left an 18-year-old man wounded in the Logan Square neighborhood on the Northwest Side.

The man was driving about 10 p.m. in the 2300 block of North Kedzie when a male inside a black Ford Focus started shooting at him, according to Chicago police.

He suffered a gunshot wound to his shoulder and was taken to Stroger Hospital, where his condition was stabilized, police said.

Police were investigating the vehicle at a BP gas station in the 3100 block of North Avenue. Bullets had struck the car’s trunk and bumper and grazed the driver’s side seat.

Shortly after 4 p.m., three teens were wounded near Chatham Academy High School in the Burnside neighborhood on the South Side.

The teens were walking in the 9000 block of South Langley when someone got out of a light-colored vehicle and fired several shots, according to police. Chatham Academy High School, a Chicago Public School, is located in the same block.

Two of the people shot were found by paramedics at 90th Place and Langley Avenue and the third was found in the 700 block of East 90th Place, according to the Fire Media Affairs.

Charges were pending late Monday against two people who were taken into custody after the shooting, police said.

At 1:32 p.m., a man was critically wounded in a shooting in the Burnside neighborhood on the South Side.

The 21-year-old was sitting in the 800 block of East 89th Street when someone walked out from the north alley and shot at him, according to police. The shooter then ran away.

The man suffered a gunshot wound to the neck and was taken in critical condition to university of Chicago Medical Center, police said.

Another man was wounded at 10:57 a.m. in the Roseland neighborhood on the Far South Side.

The 19-year-old was shot in the left hip in the 10000 block of South State Street, according to police.

He was taken to Christ Medical Center in Oak Lawn, where his condition was stabilized, police said.

The first shooting Monday happened in the Gage Park neighborhood on the Southwest Side.

A 35-year-old man was standing in a group of people about 2:20 a.m. in the 5100 block of South Homan Avenue when someone in an SUV pulled up and opened fire, according to police.

Police said someone in the group had thrown a brick at the SUV before the shooting.

The man was shot in his head and was taken to Mount Sinai Hospital in critical condition, according to police.

On Sunday, 12 people were shot, one fatally.