LUTZ, Fla - With the pandemic demanding so much of our attention, it can be easy to forget other crucial, life-saving precautions we would normally be focused on this time of year. Lightning, of course, is one of them.

It's just as destructive and deadly as it's ever been. We've witnessed examples of its dangerous power in just the past few days.

Monday afternoon, Nathanael Moore was inside the garage at his home in Lutz a bolt of lightning crashed, feet away from him.

"It was a big flash and it shook the house. It was pretty crazy," he recalled.

Video captured the lightning as it pierced the palm tree across the street, like a scorching needle.

"I think everyone's hair was sort of standing straight up," said his father, Jonathan Moore. 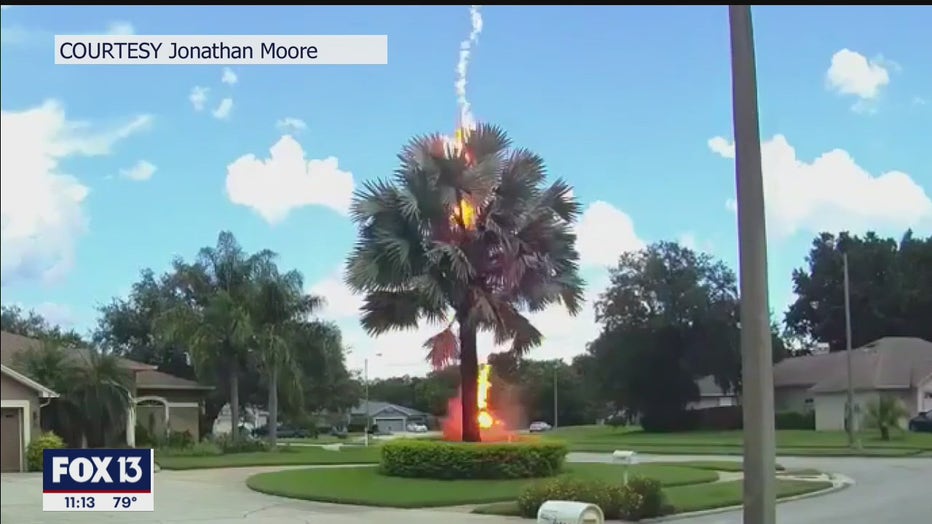 Making the video a bit more jarring, it shows blue skies in the background, with the first hint of dark clouds moving in.

"The sun was out, the skies were clear right above us and that is what the scary part of it is," Jonathan Moore said. "That lightning came out of nowhere."

FOX 13 Chief Meteorologist Paul Dellegatto said, "You hear the saying, 'a bolt from the blue' and that literally is a bolt from the blue because you see so much blue sky and the parent thunderstorm on the radar was 8 miles away from where the lightning strike occurred."

Dellegatto warns, a bolt can travel a long way from a storm, at any angle. One picture, taken by Justin Battles in Venice last year is a prime example.

"You can see the big thunderstorm itself, the cloud, the towering cumulus cloud, and then you see the lightning shoot off on the side," Dellegatto explained, "and then, where that lightning is touching ground is probably 5, 6, 7 miles away from the thunderstorm, itself."

"If you can hear thunder around you, you are at risk of a lightning strike near you," Dellegatto said.

Tuesday, Hernando County Fire Rescue battled four fires likely caused by lightning. One was at a home on Royal Ridge Court. The other three were brush fires, the largest, covering about 185 acres.

July 5, a lightning strike injured two men at Clearwater Beach. Another man was hurt July 25 after a bolt knocked him off his raft near Courtney Campbell Causeway.

"You saw that tree get struck by lightning in that video," Dellegatto said. "And when it's raining, the first thing you try to do is - I don't want to get wet - so you go under a tree. That's the worst thing you can do."

"Camping, under the tree and an open beach are probably three of the worst places you can be and unfortunately, that's three of things that we have a lot of in this state," Dellegatto said.

It's a lesson to take to heart when lightning strikes a little too close to home.

"When you hear thunder in the distance, it doesn't mean I've got to start wrapping things up," Jonathan Moore said. "It means I need to start thinking about going inside."

Lightning has killed 12 people so far in 2020, one of them in Florida, according to the National Weather Service.