KENOSHA, Wis. - A Wisconsin prosecutor’s decision not to bring charges against the officer who shot Jacob Blake in the back came as little surprise to some activists for racial justice, who predict laws must change before police are truly held accountable for using force against Black men.

After the Aug. 23 shooting that left Blake paralyzed, the decision on whether to charge Rusten Sheskey came down to a familiar question: Was the Kenosha officer justified in using force to protect himself?

Kenosha County District Attorney Michael Graveley said Tuesday that he was. Graveley said he couldn’t disprove Sheskey’s contention that he feared Blake would stab him as he tried to stop Blake from driving away with three children in an SUV.

It’s a conclusion consistent with a landmark 1989 U.S. Supreme Court ruling that found officers "are often forced to make split-second judgments" and that an officer’s reasonable fear of a threat in the heat of the moment is relevant, even if hindsight shows there was no actual threat.

But activists and Blake’s supporters say the decision not to charge Sheskey further exposes systemic racism within the criminal justice system and increases the urgency for immediate change. The needed changes, they say, include considering not only the moment an officer pulls the trigger but also should apply to such things as rules for wearing body cameras or executing no-knock warrants.

"Every day that we wait is a day too late," said Wisconsin Rep. Shelia Stubbs, a Madison Democrat who co-chairs a state Assembly task force created after Blake’s shooting and is working on bills that would increase accountability. "It’s a state of emergency. … I’m sick of seeing the constant disregard for Black lives happening."

Ben Crump, an attorney for Blake, does not dispute Graveley’s conclusion that his client had a knife. However, he said citizen video of the shooting does not show Blake extending the knife and fails to demonstrate in a reasonable way that Sheskey was attacked.

"This was not surprising, but it was appalling," Crump said. "For him to say that they could not charge because of a self-defense claim made by police is absolutely asinine and it flies in the face of all common sense when you watch the video." 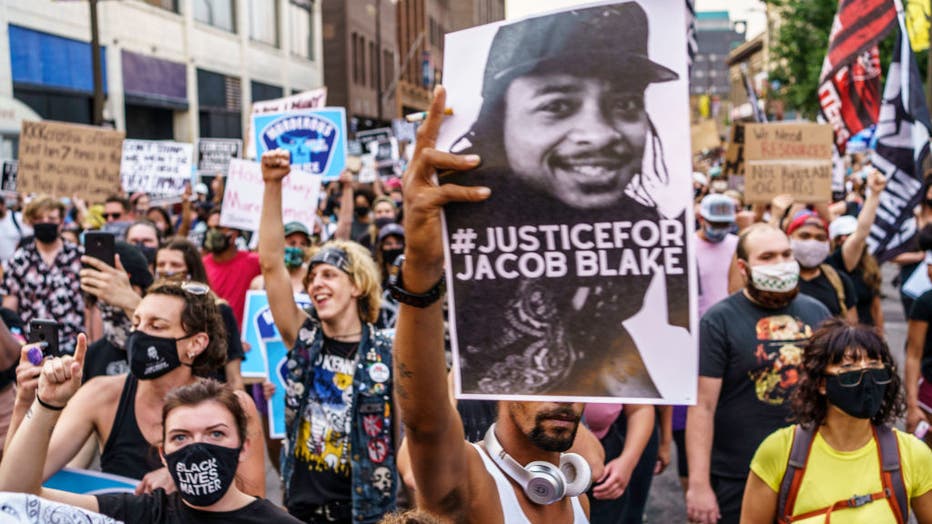 TOPSHOT - Protesters march near the Minneapolis 1st Police precinct during a demonstration against police brutality and racism on August 24, 2020 in Minneapolis, Minnesota. - It was the second day of demonstrations in Kenosha after video circulated S

Crump said "the whole criminal justice and legal system engages in the intellectual justification and discrimination to support this legalized genocide of colored people."

While states have leeway in altering laws surrounding the illegal use of force by police, that Supreme Court precedent could complicate efforts for radical overhauls.

Crump, who has represented many people whose loved ones were killed during encounters with police officers around the country, previously offered a range of comprehensive recommendations for police reform. Those included requiring body cameras and dashcams, a standard protocol for independent investigations and an easy-to-access database of disciplinary actions.

One proposed change, he said, would be to create a federal obstruction of justice charge for officers who do not turn on their body cameras during instances of excessive force.

"You have to have a system that doesn’t protect killer cops when the victims are marginalized people of color," he said. "It’s not like some complicated mechanism of law that we have to come up with."

"Kenosha has given another terrible example in a national pattern of police using excessive force against people of color during routine encounters, escalating situations instead of defusing them and then being given a pass," Chris Ott, executive director of the American Civil Liberties Union of Wisconsin, said in a statement.

Crump said the lack of body camera video in this case is part of the problem.

The city of Kenosha and its police department endorsed the use of body cameras in 2017 to hold police more accountable, but cost concerns kept the city from adopting them. The city had planned to acquire body cameras in 2022, but after Blake’s shooting, that timetable was sped up to put the cameras in use this year.

The GOP refused to go along with him, gaveling in and out of session in less than a minute without taking any action on the proposals. Assembly Republican Speaker Robin Vos called the session divisive and political, and created a task force to review police procedures.

Stubbs, who is co-chair of the task force, wants to push those proposals and others this year.

Justin Blake, Jacob Blake’s uncle who has become outspoken in pushing for police reforms, told The Associated Press that declining to charge Sheskey exposed a reality that the nation has three different sets of laws: "one for white people, one for Black people and … one for police."

Blake spoke at a local barbershop and salon blocks from the epicenter of demonstrations in downtown Kenosha in the days after his nephew was shot. A placard stuck in the snow outside read, "Fire, Indict and Convict Rusten Sheskey!"

While the kinds of angry protests seen over the summer have not emerged since Tuesday’s announcement, Justin Blake said there is anger under the surface.

"It’s like the top on a tea kettle," he said. "The steam is bubbling. The top is barely hanging on to the tea pot."

Letting the Kenosha officer off the hook will signal to other officers that they can do no wrong, Justin Blake said.

"If this guy can get away with what he did, then that means it’s open season on African-Americans," he said. "And we’re not going to tolerate that."