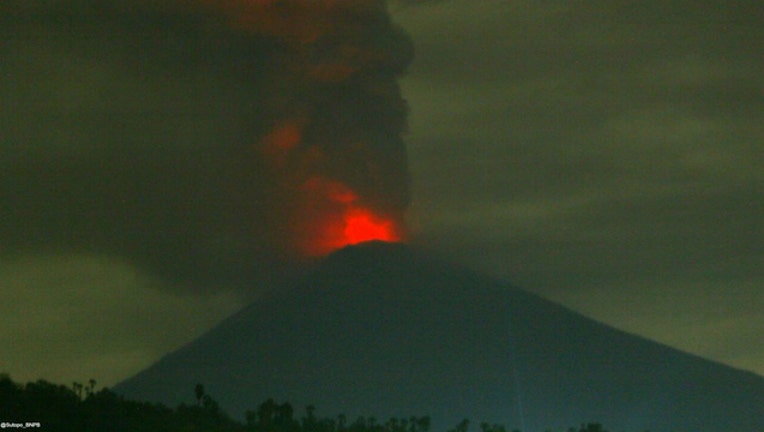 KARANGASEM, Indonesia (AP) -- Indonesian authorities raised the alert for a rumbling volcano to the highest level on Monday and closed the international airport on the tourist island of Bali, stranding thousands of travelers.

Mount Agung has been hurling ash thousands of meters into the atmosphere since Saturday, which had already forced the small international airport on the neighboring island of Lombok to close as the plumes drifted east.

The National Disaster Mitigation Agency said Bali's international airport, where most flights had been continuing, was closed for 24 hours. It said authorities would consider reopening it Tuesday after evaluating the situation.

Geological agency head, Kasbani, who goes by one name, said the alert level was raised at 6 a.m. because the volcano has shifted from steam-based eruptions to magmatic eruptions. However he says he's still not expecting a major eruption.

"We don't expect a big eruption but we have to stay alert and anticipate," he said.

The exclusion zone around the crater was widened to 10 kilometers (6 miles). Previously it ranged between 6 and 7.5 kilometers.

Ash up to half a centimeter (less than half an inch) thick has settled on villages around the volcano and soldiers and police distributed masks on the weekend.

Indonesia sits on the "Pacific Ring of Fire" and has more than 120 active volcanoes.

Mount Agung's alert status was raised to the highest level in September following a dramatic increase in tremors from the volcano, which doubled the exclusion zone around the crater and prompted more than 140,000 people to leave the area. The alert was lowered on Oct. 29 after a decrease in activity.