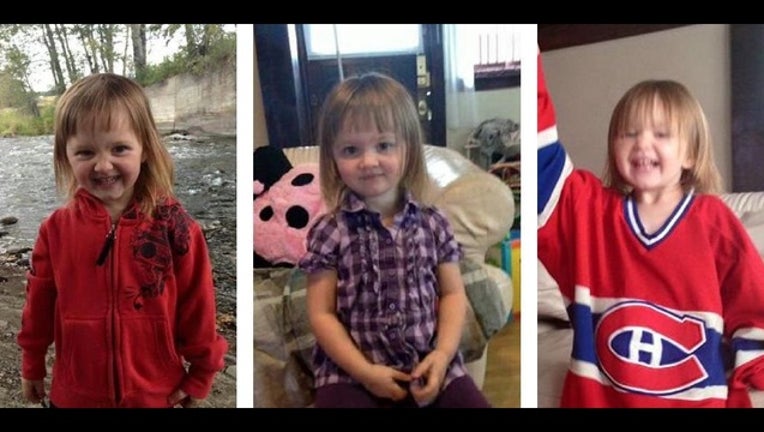 BLAIRMORE, Alberta (AP) – The Royal Canadian Mounted Police were searching Monday for a missing 2-year-old girl whose father was found dead inside a home in southwestern Alberta.

Police said Terry Blanchette, 27, was killed in a suspected homicide Monday morning in a home in Blairmore, Alberta, and his daughter, Hailey Dunbar-Blanchette has not been seen since.

Police said they found Blanchette's body shortly before noon, but investigators believe the girl has been missing since 3:30 a.m.

Blairmore is about 137 miles (220 kilometers) southwest of Calgary near the British Columbia-Alberta border.

Police issued an Amber Alert for the girl and quickly expanded it to British Columbia, Saskatchewan and the U.S. state of Montana. An air and ground search was under way in the region,

Tony Hamori, RCMP assistant district commander for southern Alberta, said both the death and the disappearance of the little girl are very troubling.

"This type of incident combined with the scene at the residence that we found is concerning to the highest degree both to the RCMP" and local community, he told reporters.

Police have not identified any suspects, but were looking for a newer model white van with a large rear antenna and a flag flying from it. The van was spotted fleeing the scene at a high rate of speed.

Blanchette worked as a cook at a bar in a nearby town and Monday was his day off, the bar's manager Tammy Tracey said.

"He was a good worker and a good father. He did anything for his daughter, he loved her dearly. He was a good dad. He lived for her," Tracey said.

Hailey's mother, Cheyenne Dunbar, rushed from her home in Edmonton to be with relatives near her former boyfriend's home.

"We just pray that whoever has her will keep her safe," Corette Harrington, a family friend, said. "It's heartbreaking to know that when she comes back, her dad's not going to be there."

Dunbar and Blanchette shared custody of the girl, Harrington said.