A man was removed from an Allegiant Air flight Monday morning to Punta Gorda, Florida after allegedly asking a flight attendant to put a face mask on, according to a report by Newsweek. (Credit: Anonymous via Storyful)

A man was removed from an Allegiant Air flight Monday morning to Punta Gorda, Florida after allegedly asking a flight attendant to put a face mask on, according to a report by Newsweek.

In a video posted to Twitter, an elderly man appears to be in disbelief after a flight attendant in a mask asks the man to leave.

The user who posted the video said the man was "thrown off @allegiant airline this morning from Punta Gorda Florida this morning because he asked the flight attendant why he had to wear a mask and she didn’t have to wear one."

A spokesperson for Allegiant told FOX News that the passenger was removed for violating FAA regulations by "repeatedly and aggressively disrupting the preflight safety briefing" after the flight attendant "briefly lowered their mask to speak into the public address microphone so that the announcement could be understood," citing passengers who stated they could not clearly hear. 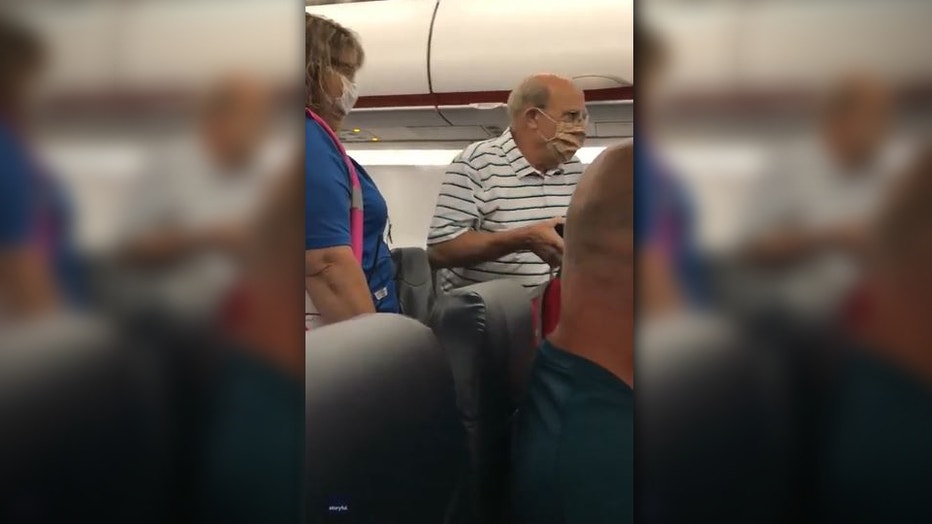 According to Allegiant, face coverings are required for all phases of travel. (Credit: Anonymous via Storyful)

"That's when the passenger became disruptive," the spokesperson said. "This was not an 'ask.' The flight attendant's mask was back in place immediately following the announcement."

According to Allegiant, face coverings are required for all phases of travel, including at the ticket counter, gate area and during the duration of a flight. They also noted that every airline passenger is provided with a mask and disinfectant wipes and that their health acknowledgment questionnaire required at check-in includes an agreement to wear a mask throughout travel.

Other users had previously taken to Twitter with their own experiences of flight attendants either wearing masks incorrectly or not following protocol entirely.

Meanwhile, another user called the airline "not that fussy" over its mask policy.

The airline was just named one of the top 10 North America safest airlines to travel with during COVID-19, according to Travel Pulse.