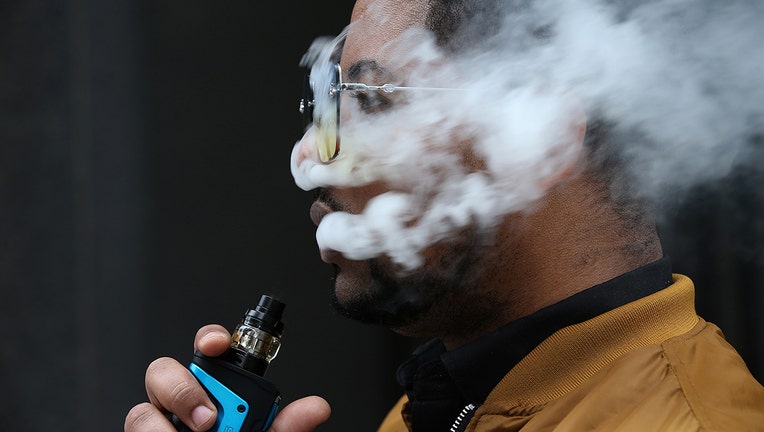 The American Medical Association on Tuesday called for an immediate ban on all electronic cigarettes and vaping devices.

The group adopted the sweeping stance at a policy-making meeting in San Diego. It aims to lobby for state and federal laws, regulations or legal action to achieve a ban, but the industry is sure to fight back.

The AMA cited a surge in underage teen use of e-cigarettes, which typically heat a solution that contains nicotine.

“It’s simple, we must keep nicotine products out of the hands of young people.” Dr. Patrice Harris, AMA’s president, said in a statement.

The doctors’ group said a separate health issue also prompted its action - the recent U.S. outbreak of lung illnesses linked to vaping. Most of those sickened said they vaped THC, the high-inducing ingredient in marijuana, not nicotine. Officials believe a thickening agent used in black market THC vaping products may be a culprit.

The outbreak has “shined a light on the fact that we have very little evidence about the short- and long-term health consequences of e-cigarettes and vaping products,” Harris said. About 2,100 people have gotten sick; 42 have died.

The AMA has previously sought bans on e-cigarette flavors and ads.

Some observers say the AMA’s position is flawed and has little chance of achieving a sweeping ban.

“I would be 100% with the AMA if they were seeking a ban on all tobacco products that are smoked, including e-cigarettes,” said Jonathan Foulds, a tobacco addiction specialist at Penn State University. “But right now, nicotine electronic cigarettes are competing with and replacing the most harmful legal product in this country.”

Gregory Conley, president of the American Vaping Association, a pro-vaping advocacy group, said the Centers for Disease Control and Prevention has made clear that its focus “is not store-bought nicotine vaping products, but illicit contaminated THC oil cartridges sold by drug dealers.”

“It would be a mistake for adult smokers and their families to listen to these misguided prohibitionists, as the evidence continues to indicate that adult smokers who switch to nicotine vaping products greatly improve their health," Conley said.

The AMA policy calls for a ban of vaping products not approved to help people quit. But so far, none have been reviewed or approved for that use by the U.S. Food and Drug Administration.

Stephanie Caccomo, an FDA press officer, said the agency is “committed to doing everything we can to prevent kids from using tobacco products and will continue to develop a policy approach that aligns with that concern.”

E-cigarettes first appeared in the U.S. more than a decade ago and have grown in popularity despite little research on their long-term effects. The FDA has been widely criticized for repeatedly pushing back its own deadline to begin reviewing thousands of vaping products on the market, at one point until 2022. The deadline is now next May.