Congressional Democrats call for $50,000 of student debt to be canceled

Democrats from the Senate and House of Representatives spoke outside the Capitol on Feb. 4, reigniting their call to have President Joe Biden forgive up to $50,000 in student debt.

Rep. Alexandria Ocasio-Cortez criticized President Biden after he shot down a proposal from progressive Democrats to eliminate $50,000 in student loan debt, saying the president's arguments against acting unilaterally on the matter "just don't hold water."

"The case against student loan forgiveness is looking shakier by the day," Ocasio-Cortez, D-N.Y., tweeted Tuesday night. "We’ve got the *Senate Majority Leader* on board to forgive $50k. Biden’s holding back, but many of the arguments against it just don’t hold water on close inspection. We can and should do it. Keep pushing!"

The progressive firebrand's comments came on the heels of Biden's CNN town hall in Milwaukee, his first since he took office in January. Asked by an audience member during the event about his commitment to wiping away $50,000 in student loan debt per borrower, Biden said: "I will not make that happen."

Biden said he didn't want to forgive the debts of borrowers who attended elite private schools like "Harvard and Yale and Penn," arguing the money would be better repurposed toward early childhood education and making community college tuition-free. Biden also questioned whether he has the authority to cancel billions of dollars in loans without Congress.

"My point is: I understand the impact of debt, and it can be debilitating," Biden said. "I am prepared to write off the $10,000 debt but not $50 [thousand], because I don't think I have the authority to do it."

RELATED: Democrats urge Biden to cancel up to $50k in student loan debt by executive action

Biden has called for forgiving $10,000 in student loan debt as part of a broader coronavirus relief effort, and extended a freeze on student loan payments through Sept. 30, 2021 immediately upon entering office, benefiting about 41 million Americans — but Ocasio-Cortez and other Democrats believe the president needs to go further.

"Who cares what school someone went to? Entire generations of working class kids were encouraged to go into more debt under the guise of elitism, "she said. "This is wrong. Nowhere does it say we must trade-off early childhood education for student loan forgiveness. We can have both."

At the beginning of February, Sens. Chuck Schumer, D-N.Y., and Elizabeth Warren, D-Mass., introduced a resolution calling on Biden to erase $50,000 in student loan debt via executive order.

The lawmakers maintained that Biden could use existing executive authority under the Higher Education Act to order the Department of Education to "modify, compromise, waive or release" student loans. 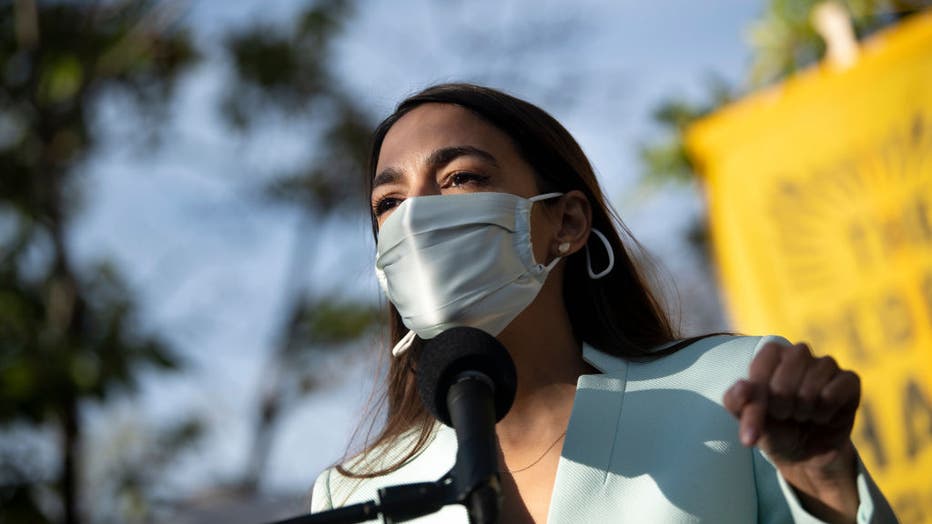 UNITED STATES - NOVEMBER 19: Rep. Alexandria Ocasio-Cortez, D-N.Y., speaks during a news conference with other Democrat members of Congress to push President-elect Joe Biden to appoint a corporate-free cabinet and an administration staffed with perso

"Canceling student loan debt is the single most effective executive action that President Biden can take to kickstart this economy," Warren said.

Still, canceling student loan debt may disproportionately benefit wealthy Americans: A recent working paper published by the University of Chicago’s Becker Friedman Institute for Economics shows that erasing all student loan debt would distribute $192 billion to the top 20% of earners in the U.S., but just $29 billion to the bottom 20% of U.S. households.

Such sweeping executive action by Biden would almost certainly face a legal challenge, and it's unclear whether it could survive. Critics have argued that using such power exceeds the president's authority granted by Congress.

Erasing student loan debt would also add to the nation's already-ballooning national deficit, which totaled a record $3.1 trillion for the 2020 fiscal year -- not including the $900 billion coronavirus relief legislation that lawmakers approved in December.

Outstanding student loan debt has doubled over the past decade, nearing a staggering $1.7 trillion. About one in six American adults owes money on federal student loan debt, which is the largest amount of non-mortgage debt in the U.S.

It has been cited as a major hindrance in people’s "economic life" by Federal Reserve Chairman Jerome Powell.