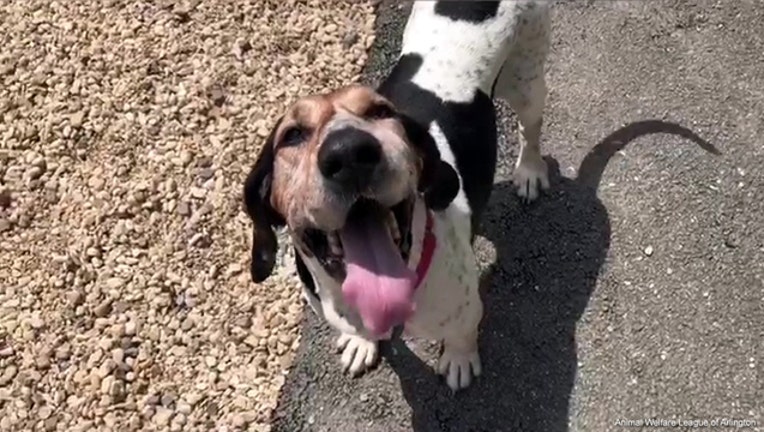 ARLINGTON, Va. - An animal shelter in Arlington is helping a dog dying of cancer to fulfill his bucket list, including finding a family for him to spend his remaining days with.

Smoke, a 10-year-old hound, was diagnosed with terminal cancer and the Animal Welfare League of Arlington said it’s uncertain exactly how much time he has to live.

“We don’t know how long Smoke has left with us - it could be six months, or it could be just a few weeks. What we do know is that Smoke deserves to live the rest of the time he has left in a home with a family that loves him,” the AWLA said on Facebook. “We are hoping that someone will come and adopt this big, goofy boy and give him as much love as they can during his last weeks and months.”

In the meantime, the AWLA has started a bucket list for Smoke, which includes:

- Go to the beach

- Have a birthday party

- Ride in a fire truck

- Have breakfast in bed

- Ride in a police car and bay with the sirens

- Get a full-body doggie massage

- Jump in a big pile of leaves

- Get a professional photo shoot

- Ride in a convertible

- Get a huge box of toys to play with and share with his shelter friends!

The AWLA said Smoke went to a visit a potential foster home over the weekend and anyone who would like to help Smoke fulfill his bucket list is encouraged to email mail@awla.org.

You can learn more about the AWLA and their mission here.