CNN's backup audio revealed what was said between Warren and Sanders after the Iowa debate, with both of them accusing the other of lying.

DES MOINES, Iowa - Audio of the tense-looking post-debate exchange between Sen. Elizabeth Warren, D-Mass., and Sen. Bernie Sanders, I-Vt., was released Wednesday night, revealing both of them accusing the other of "lying" on national television.

CNN, which hosted the debate, reported that the "backup" audio archive of its debate coverage had captured the moment the progressive candidates approached each other after the debate.

"I think you called me a liar on national TV," Warren said to Sanders as he reached out his hand for a handshake, which she did not reciprocate. 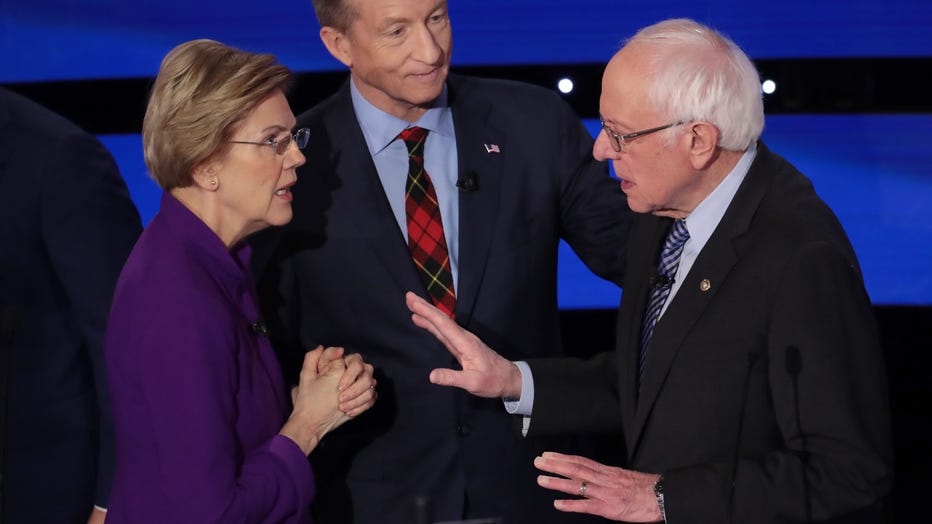 "What?" Sanders said while ongoing applause can be heard filling the Iowa auditorium.

"I think you called me a liar on national TV," Warren repeated.

Before parting ways, the Vermont lawmaker fired back at his Senate colleague.

"You called me a liar," Sanders told Warren. "You told me -- let's not do this right now.“

"I don't want to get in the middle of it, I just wanted to say hi, Bernie," Steyer told the senator.

"Yeah, good. Okay," Sanders quickly replied as he walked away.

The Warren campaign declined to comment. The Sanders campaign has yet to respond to Fox News' request for comment.

One of the most talked-about moments of the night was when Sanders was asked by the debate moderator, CNN political correspondent Abby Phillip, about CNN's report that cited unnamed sources who claimed that the Vermont senator told Warren he believed a woman couldn't win the presidency in December 2018 ahead of their presidential runs.

Ahead of the debate, Sanders flatly denied the charge while Warren affirmed the reporting after she initially had declined to comment.

"CNN reported yesterday that -- and Senator Warren confirmed in a statement -- that in 2018 you told her that you did not believe that a woman can win the election. Why did you say that?" Phillip asked.

Sanders then pointed to his attempt to "draft" Warren to run for president in 2016 and vowed to support the eventual Democratic nominee, whomever it be -- including female candidates such as Warren and Sen. Amy Klobuchar, D-Minn.

"Senator Sanders, I do want to be clear here. You're saying that you never told Senator Warren that a woman could not win the election," Phillip said.

"That is correct," Sanders said.

"Senator Warren, what did you think when Senator Sanders told you a woman could not win an election?" Phillip then asked his progressive rival, which sparked audible laughs in the auditorium and Sanders' head shaking.

"I disagreed," Warren simply replied before pivoting to the argument that she and Klobuchar are more electable than the men on stage since they've won "every" election they've run in.