With Poehler at the Beverly Hilton in Beverly Hills, California, and Fey in New York’s Rainbow Room, the two did an initial gag where Fey reached out through the screen and stroked Poehler’s hair.

The Globes, normally a loose-and-boozy party that serves as the kickoff for Hollywood’s awards season, has been beset with problems beyond the coronavirus leading up to this year’s ceremony. They include a revelation in the Los Angeles Times that the Hollywood Foreign Press Association, which gives out the awards, has no Black voting members in the group.

The association, comprised of 87 entertainment journalists and photographers, select the nominees and winners.

Fey took a shot at the organization in the show opening, explaining to the two small live audiences made up of first responders and essential workers that "the Hollywood Foreign Press Association is made up of around 90 no Black journalists." 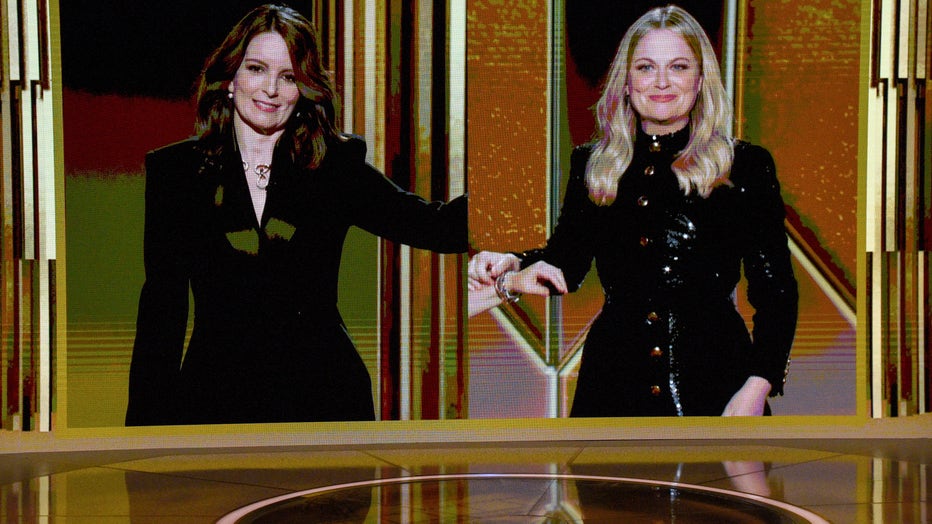 Awards were handed out in 25 categories, with 14 honoring films and 11 for television.

Six months after his death at age 43, Chadwick Boseman has won a Golden Globe. The award for best actor in a dramatic film was earned by Boseman for his final role, in "Ma Rainey’s Black Bottom."

Through tears, Ledward added: "I don’t have his words, but we have to take all the moments to celebrate those we love."

In the Netflix film, Boseman plays an ambitious trumpeter named Levee who aims to launch himself with his own updated version of the songs of Ma Rainey, the powerhouse blues singer played by Viola Davis.

Boseman, who starred in the Marvel blockbuster "Black Panther," died in August after privately battling colon cancer for four years.

Andra Day was singing no blues at the Golden Globes. In a major surprise, the Globe for best actress in a drama film went to Day in "The United States vs. Billie Holiday" on Sunday night.

It was the first acting Golden Globe for the 36-year-old singer, songwriter and actress Day.

The love just kept flowing down "Schitt’s Creek." The Canadian comedy series created by the father-son team of Eugene and Dan Levy that dominated September’s Emmy Awards was the winner of the Golden Globe for best comedy or musical TV series.

Catherine O’Hara also rode "Schitt’s Creek" to a Golden Globe, winning the Globe for best actress in a musical or comedy series.

It was checkmate for "The Queen’s Gambit, capturing two Golden Globes. The Netflix show about a young girl in an orphanage who becomes a chess prodigy won the Globe on Sunday night for best limited series or TV movie, moments after star Anya Taylor-Joy won best actress in a limited series.

Rosamund Pike was the surprise winner of the Golden Globe for best actress in a movie musical or comedy for her work in "I Care a Lot."

The Golden Globe for best actress in a drama series went to Emma Corrin in Netflix's "The Crown." The series also won the award for Best Television Series - Drama.

The winner of the Golden Globe for best supporting actor in a film was Daniel Kaluuya for his work in "Judas and the Black Messiah."

Jodie Foster won her first Golden Globe in nearly three decades for best supporting actress in a film Sunday night for her role in "The Mauritanian."

Chloe Zhao became the first woman of Asian descent to win the Golden Globe for best director on Sunday night in a groundbreaking year for female filmmakers.