Brock arrived to the Cards in June 1964, swapped from the Chicago Cubs for pitcher Ernie Broglio in one of baseball’s most lopsided trades.

Dick Zitzmann, Brock's longtime agent and friend, confirmed Brock's death on Sunday, but he said he couldn't provide any details. The Cardinals and Cubs also observed a moment of silence in the outfielder's memory before their game at Wrigley Field.

Brock had recently celebrated his birthday in June, turning 81. He was one of baseball's signature leadoff hitters and base stealers who helped the St. Louis Cardinals win three pennants and two World Series titles in the 1960s.

“I think he led a life that will never be duplicated,” Zitzmann said.

The Cardinals Hall of Famer had battled a series of medical conditions, according to local reports, and was diagnosed with multiple myeloma, a blood cancer that starts in the bone marrow’s plasma cells, in 2017, according to FOX News.

Brock previously had a leg amputated five years ago due to complications from diabetes and suffered a stroke in 2018, according to the Associated press.

Brock was elected into the National Baseball Hall of Fame in 1985 after a 19-year career in which he stole 938 bases — a National League record until it was broken by Oakland Athletic’s Ricky Henderson in 1991.

After his playing career ended in 3,023 hits and then a record 938 stolen bases, Brock worked as an instructor in Cardinals camp and a broadcaster. He went to work as a base running consultant for the Minnesota Twins, who then went on to win the World Series in 1987.

Brock's death came after Hall of Fame pitcher Tom Seaver died Monday. Brock and Seaver faced each other 157 times, the most prolific matchup for both of them in their careers.

Brock never played in another World Series after 1968, but remained a star for much of the last 11 years of his career.

He was so synonymous with base stealing that in 1978 he became the first major leaguer to have an award named for him while still active — the Lou Brock Award, for the National League’s leader in steals. For Brock, base stealing was an art form and a kind of warfare. He was among the first players to study films of opposing pitchers and, once on base, relied on skill and psychology. 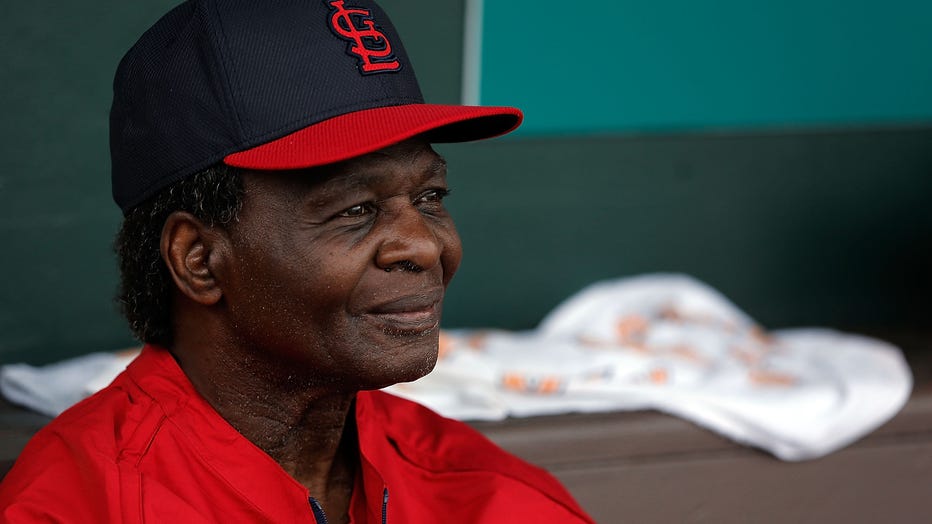 JUPITER, FL - MARCH 19: Former player and member of the baseball hall of fame, Lou Brock of the St. Louis Cardinals, sits in the dugout during a game against the Minnesota Twins at Roger Dean Stadium on March 19, 2014 in Jupiter, Florida. St. Louis w

In his 1976 memoir “Lou Brock: Stealing is My Game,” he explained his success. Take a “modest lead” and “stand perfectly still.” The pitcher was obligated to move, if only “to deliver the pitch.” “Furthermore, he has two things on his mind: the batter and me,” Brock wrote. “I have only one thing in mind — to steal off him. The very business of disconcerting him is marvelously complex.”

Brock closed out his career in 1979 by batting .304, making his sixth All-Star Game appearance and winning the Comeback Player of the Year award. The team retired his uniform number, 20, and he was inducted into the Hall of Fame in 1985 in his first year of eligibility.

The soft-spoken Brock was determined no matter the score and sometimes angered opponents and teammates by stealing even when the Cards were far ahead. He also made two damaging mistakes that helped cost St. Louis the ’68 World Series.

In Game 5, with the Cards up 3-2 in the top of the fifth and leading the series 3-1, Brock doubled with one out and seemed certain to score when Julian Javier lined a single to left. But Brock never attempted to slide and left fielder Willie Horton’s strong throw arrived in time for catcher Bill Freehan to tag him out.

The Tigers were among many who cited that moment as a turning point. They rallied to win 5-3 in Game 5 and take the final two in St. Louis. In Game 7, won by Detroit 4-1, Brock made another critical lapse: He was picked off first by the Tigers’ Mickey Lolich after singling to lead off the sixth inning, when there was no score.

After his playing career was over, Brock worked as a florist and a commentator for ABC’s “Monday Night Baseball” and was a regular for the Cards at spring training. He served as a part-time instructor while remaining an autograph favorite for fans, some of them wearing Brock-a-brellas, a hat with an umbrella top that he designed.