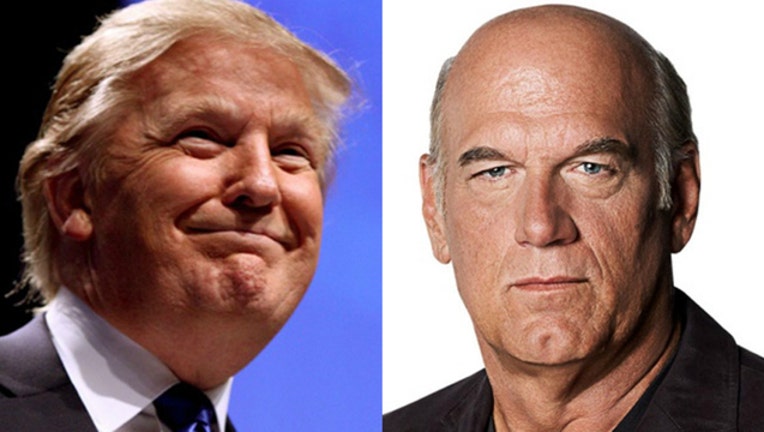 CHICAGO (AP) — He was a candidate few thought stood a chance. Best known as a television showman, he seemed more interested in self-promotion than winning public office. But soon he was dominating media coverage and debate stages, each pungent remark only endearing him more to a disenchanted public.

Then Jesse "The Body" Ventura became governor of Minnesota.

Well before Donald Trump shook up the race for the Republican presidential nomination, there was Ventura, the former professional wrestler, radio talk show host and suburban mayor who — in his own election-night words — "shocked the world" with his improbable 1998 victory.

As Trump looks to expand his delegate lead in Super Tuesday contests and further show that he's for real, the similarities between his campaign and Ventura's continue to grow. The billionaire businessman enters the biggest day of the race so far with several wins under his belt and exuding confidence about his chances in the contests across the Deep South. His top rivals, Ted Cruz and Marco Rubio, are struggling to contain him.

"Jesse's success is the perfect case history to show this can happen," said Bill Hillsman, a Minneapolis ad man and close Ventura adviser who came up with several memorable campaign ads, including one that depicted Ventura as an action figure who tells special interests: "I don't want your stupid money."

There are differences, of course, particularly on social issues. Trump has proposed expanding the border wall to keep out immigrants from Mexico and has rejected gay marriage. Ventura has supported open borders and said during a 1998 debate that government shouldn't be involved in who may marry.

Ventura also was a Reform Party candidate who blasted Republicans and Democrats as "rival gangs," while Trump is seeking the GOP nomination.

But voters see Trump as sufficiently untethered from the party. Both Trump and Ventura are brash and loose with words, much in contrast to the more scripted traditional candidates.

That was enough to draw Darren Anderson to the polls in 1998, when at age 25 he was one of many first-time voters who helped Ventura win. Anderson, now 43, recalls watching a debate between "Jesse," Democrat Skip Humphrey and Republican Norm Coleman. Ventura was the only one who "called a spade a spade."

"He wasn't your standard politician and he wasn't blowing smoke."

That's also why the teacher from New Ulm, Minnesota, is now leaning toward Trump in Minnesota's vote Tuesday. While in the back of his mind he worries a Trump presidency could "go really wrong," he says the GOP front runner "is saying things the country wants to hear."

Both Ventura and Trump drew some of their strongest support from blue collar voters who dislike the political establishment.

But Ventura's typical voter was younger, largely male and "for the most part regarded the election as a giant kegger," said St. Cloud State University political science professor Stephen Frank, who co-wrote a book on Ventura's election.

Ventura appealed to them as much for his personality as for his promises to cut taxes amid a budget surplus. Coleman, a former St. Paul mayor, and Humphrey, the son of former Vice President Hubert Humphrey, focused on each other during debates, ignoring Ventura.

Ventura told The Associated Press Monday that he sees echoes of his campaign in Trump's. But he's split between supporting Trump or Sen. Bernie Sanders, who's vying for the Democratic nomination. He's also considering his own bid as a third-party Libertarian candidate.

Dane Smith, who spent 30 years as a reporter in St. Paul and Minneapolis and covered Ventura, recalls a "Trump-like" feeling in the governor's race when polls showed Ventura running surprisingly strong.

"You were saying to yourself 'Holy cow. This guy isn't going to collapse,' " Smith said.

Even Ventura needed some convincing on election night. After the first TV station called the race saying he'd won, the governor-elect told his team he wanted to wait for more results before making his victory speech.

Ventura had a mixed record as governor. After campaigning on a tax cut, Ventura refunded part of a state surplus to taxpayers — payments he dubbed "Jesse checks." He oversaw building of the Twin Cities' light rail and provided more money for schools.

But he also butted heads with lawmakers and seemed to tire of the day-to-day slog of government. Toward the end of his first term he said he wouldn't seek another.

"There's no consensus whether he was a bad governor or an average governor," Smith said. "There is sort of a consensus he was far too egotistical and self-centered, that the whole purpose was to serve his own fame and fortune."

Still, Minnesota voters like Anderson say if there's a lesson for 2016, it's to take Trump seriously.

"So many people took it as a joke, a big public joke," Anderson said. "And then they win."