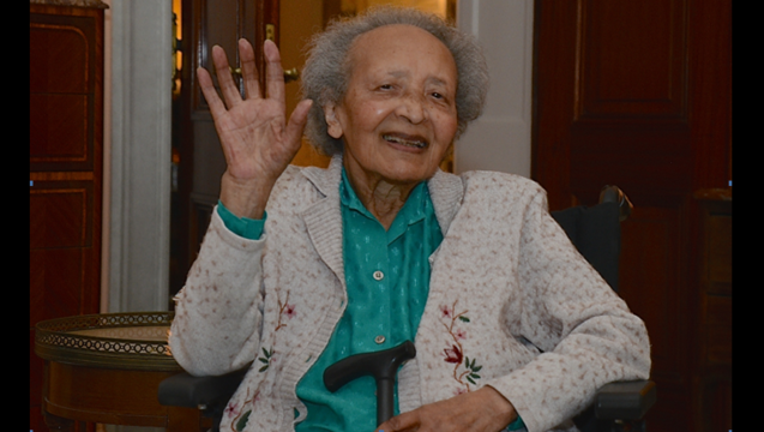 BRUSSELS (AP) - A Belgian nurse who helped save hundreds of American soldiers during the Battle of the Bulge at the end of World War II has died and will be buried near where thousands of Allied troops fell.

Augusta Chiwy, who died Sunday at 94, will be laid to rest Saturday in a family plot at a cemetery in the town of Bastogne, southeast Belgium, following a civilian and military ceremony, her family said.

Chiwy, portrayed as the character 'Anna' in the book and TV series "Band of Brothers," received a Belgian knighthood and a U.S award for valor in 2011.

The Battle of the Bulge was a ferocious encounter during the final stages of World War II when Adolf Hitler launched a major offensive against Allied forces. About 80,000 American soldiers were killed, captured or wounded.

Chiwy volunteered in an aid station in Bastogne, where wounded and dying U.S. soldiers by the thousands were being treated by a single doctor from December 1944 through January 1945. The diminutive Congo-born nurse braved the gunfire, helping whoever she could.

The Nazis hoped the surprise attack would reach the Belgian port of Antwerp and cut off the advancing allied armies. Bastogne, a market town at a critical road junction, was quickly besieged. U.S. troops - led by paratroopers of the 101st Airborne Division - were surrounded but resisted and the key crossroads was never taken.

Bastogne was heavily shelled and reduced to ruins. Another Belgian nurse - Chiwy's friend Renee Lemaire - was killed along with about 30 patients when a bomb hit a cellar full of the wounded.

"What I did was very normal," Chiwy said as she received the U.S. Civilian Award for Humanitarian Service in 2011. "I would have done it for anyone. We are all children of God."