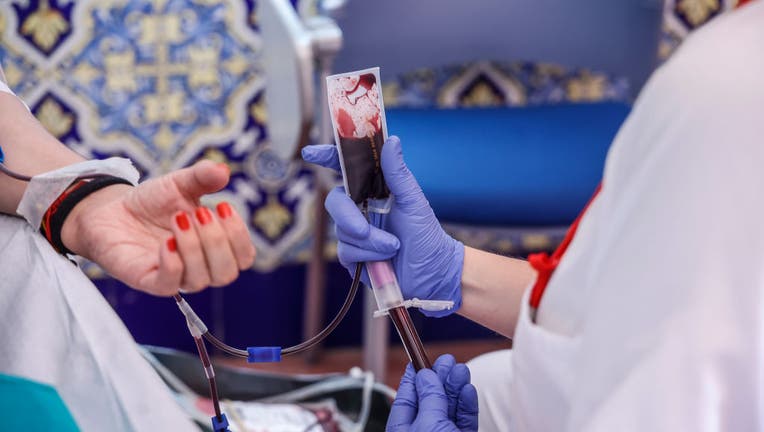 VALENCIA, SPAIN - JUNE 29: A nurse takes blood during the presentation of the summer blood donation campaign at the Malvarrosa Hospital on June 29, 2022, in Valencia, Valencia, Spain. The campaign has been organized by the Transfusion Center of the V

MENLO PARK, Calif. - A new study found that a blood test could detect multiple cancers even before symptoms start showing.

Grail, LLC., a health care company, announced the results from the pathfinder study after using a blood test as part of a multi-cancer early detection screening. Researchers presented their findings at the European Society for Medical Oncology (ESMO) Congress 2022 in Paris.

The pathfinder study involved 6,662 people who were 50 years and older, which researchers believe have an elevated risk of developing cancer.

RELATED: Biden hopes ending cancer can be a 'national purpose' for US

Part of the study involved participants being followed for 12 months after enrolling in the study.

Researchers detected a cancer signal in 92 participants with 35 participants actually diagnosed with cancers.

Sekope Sharits and his mother spoke with FOX Television Stations about the challenges they face.

Of the confirmed cancer patients, 71% of participants had cancer types that had no routine cancer screening available. Nearly half of non-recurrent cancers were found in the early stages.

Researchers said the blood test had a 97% accuracy in detecting cancer which was followed up by a professional diagnosis from a doctor.

Some of the cancers detected were Stage I cancers of the liver, small intestine, and uterus, and Stage II pancreatic, bone, and oropharyngeal cancers.

The blood test, also known as Galleri, uses next-generation sequencing and machine-learning algorithms to analyze methylation patterns of cell-free DNA (cfDNA) in the bloodstream, which can carry cancer-specific information. DNA methylation is a process used by cells to regulate gene expression. If a cancer signal is detected, Galleri will pinpoint where in the body the cancer is coming from to help health care providers determine the appropriate next steps for patient treatment.

"The PATHFINDER study is an exciting first step towards fundamental change in the approach to cancer screening," Dr. Deb Schrag of Memorial Sloan Kettering Cancer Center in New York said in a news release. "The study found cancer in about 1% of participants including types for which there is no established screening method. The study demonstrated the feasibility of this paradigm and solid test performance."

Wesley Culver, 17, spoke with FOX Television Stations about how his bout with cancer helped him discover his artistic side.

"Although continued public health efforts to optimize adherence to existing screening strategies that have been proven effective are critical, this study provides a glimpse of what the future may hold—the opportunity for screening using blood tests to detect various types of cancers at their earliest and most treatable stages," she continued.

Currently, recommended cancer screenings in the U.S. only cover five different types of cancer and can only screen for one type at a time. According to Grail, 71% of cancer deaths are caused by cancers that are not commonly screened for.

According to FOX Business, Grail is currently working to obtain full approval for Galleri from the Food and Drug Administration.