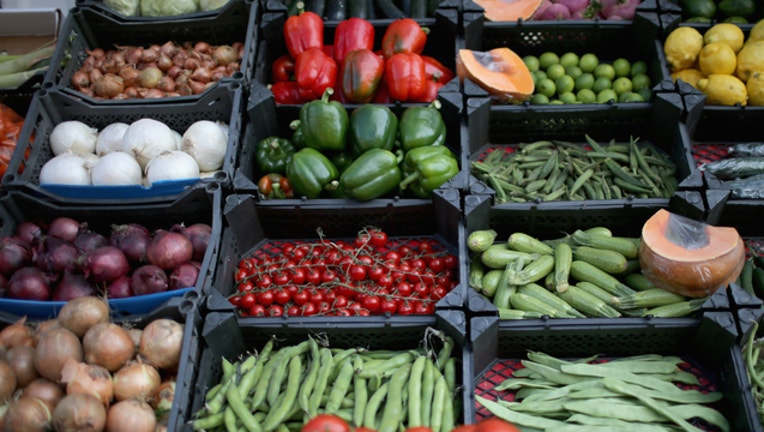 FOX NEWS - The issues on the U.S.-Mexico border could soon start impacting the price of fruits and vegetables.

For fresh produce, time is of the essence. Now that wait times have increased on border crossings -- because of a shift in personnel to address the border crisis -- it's been tougher for U.S. companies to bring fresh fruits and vegetables from Mexico.

And experts say that will impact prices.

Fruit and vegetable distributors that stock the shelves of grocery stores throughout America, including tomatoes, onions, jalapeños, carrots, pineapples, among others —rely on farms in Mexico for that produce. Forty-three percent of all U.S. fruit and vegetables come from Mexico, according to the U.S. Department of Agriculture.

“(The) Mexican border, it’s one of the most important crossings to the United States,” said Joshua Duran, Amore Produce sales representative.

But over the past three weeks, distributor Amore Produce truck drivers carrying that produce have seen up to three times the wait at the border, stuck in sometimes 15 hours of log-jam traffic to cross into the U.S. as they carry produce in their trucks. Duran said truck drivers are seeing only one or two gates open at the border.

“Now we are having a lot of problems in the border,” Duran said. “So, let’s say we used to have like five hours. We’re getting 10 or 15 hours to pass that truck to the United States…one or two (gates) are not enough to get all the entire trucks coming from Mexico and not only for produce, for all the products that people here in the United States get from Mexico.”

It’s caused the McAllen produce distributor, located just 20 minutes from the border, to have less produce than usual. Duran said the company is not able to deliver the fresh produce to the 10 states they distribute to, including Florida, Maryland, New York, New Jersey, Colorado—because their truck drivers are waiting longer which gives more time for the produce to rot quicker and not make it fresh to the consumer.

“We couldn’t get it here and we couldn’t send it to the customers in the north,” Duran said.

Marabella Produce owner Alejandro Knight has to throw produce out because by the time it gets to him, he notices they will spoil when they’re delivered to the customer and hit grocery store shelves. Knight said his fridge warehouse is almost always full, even with the floor covered in pallets. It hasn’t been like that recently, as floors have been bare and some parts of the facility have been empty.

“We cannot deliver a fresh product anymore if we have to wait for each load to cross, five to six days, it's impossible to work like this,” Knight said.

Knight said the Mexican growers are now “afraid” to send the fruit (and veggies) because of the border wait time, so they keep the produce in Mexico.

Marabella Produce normally sends seven to 10 loads with 1,800 cases of produce per week. But now, it just has three to seven loads a week. The company usually distributes to Chicago, North Carolina, Maryland, Atlanta—but lately, has had to limit the shipments to Texas.

“They won't get fresh produce in their houses, they won’t get fresh tomatoes or pineapples, or they will have very ripe fruit in their stores, so it’s not the same,” Knight said.

If this keeps up, it could lead to everyday American consumers finding produce more expensive with the supply drying up. University of Texas Rio Grande Valley economist, Salavador Contreras, said Americans are likely to feel the effects of these longer wait times.

U.S. Customs and Border Patrol temporarily reassigned 545 CBP officers from ports around the nation’s border to help Border Patrol in the surge of apprehensions of family units and unaccompanied minors from Central America that have “overwhelmed Border Patrol capabilities and facilities.”

“Facilitation of legitimate trade and travel remains a priority for CBP at its 328 ports of entry nationwide," a U.S. Customs and Border Patrol spokesperson said. "While the current southwest border security and humanitarian crisis is impacting CBP operations, we are working to mitigate the effects as much as possible…Travelers are urged to plan accordingly and check the CBP wait times page for the most up-to-date border crossing information."

U.S. Customs and Border Patrol said the long wait times vary from location and time of day. They update their data hourly.

CBP anticipated this and advised border communities late March of the changes: “There will be impacts to traffic at the border. There will be a slowdown in the processing of trade, there will be wait time increases in our pedestrian and passenger vehicle lanes.”

Contreras said reducing the number of customs agents at the border has an economic impact on the U.S. economy.

“It’s been estimated that staffing one to three additional booths increases U.S. GDP by $2 million and adds roughly 33 additional jobs,” Contreras said. “So, trade flows are very important for the U.S. economy. They have a big impact on the U.S. economy. And if we reduce the number of agents at customs and increase the wait times, then that would have the opposite effect of reducing U.S. GDP and then reducing U.S. jobs.”

In the meantime, produce distributors are hopeful things will turn around quickly.

“I hope the authorities open their eyes and notice that this is affecting not only in economic terms but also in every family,” Knight said. “The United States, all the people should be served the best produce on the tables. They won’t get it like this.”