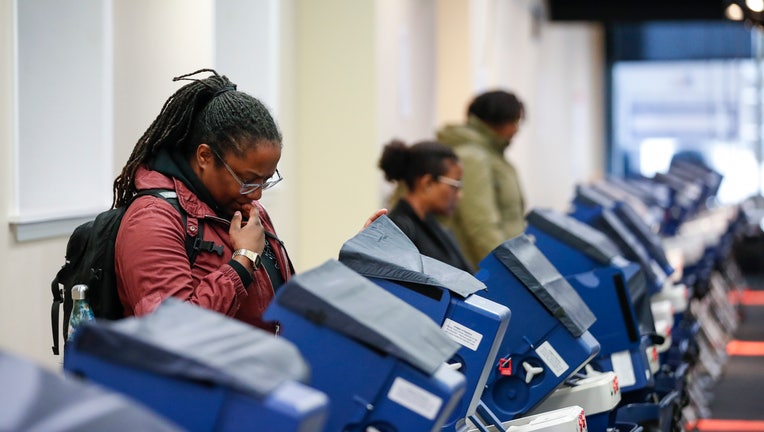 CHICAGO - Voters across the state on Tuesday decided competitive primary races for the U.S. House and Illinois Supreme Court as concerns about the coronavirus outbreak loomed large.

Here’s a look at turnout and key primary contests:

Election officials have been pushing early voting and voting by mail as ways to help contain crowds and slow the spread of the coronavirus outbreak during the Illinois primary.

Still, there were issues at the polls Tuesday, particularly in Chicago where election officials had worried about a shortage of election judges and had to scramble to replacements for more than 200 polling places that had declined to host voters because of the COVID-19 pandemic.

Seven Democrats are vying for a seat on the Illinois Supreme Court once held by the high court’s first black justice.

Democrat Charles Freeman, who died earlier this month at 86, held the post from 1990 to 2018, when he retired. P. Scott Neville, formerly an Illinois First District Appellate Court justice, was appointed to complete the term.

Neville and six other candidates are seeking a new 10-year term. With no Republicans, Tuesday’s winner will likely win November’s general election.

Neville came under fire last summer when WMAQ-TV in Chicago reported that he’d received a homeowner’s exemption on a home that listed his late mother as owner. Neville repaid $3,000 for four years in which he had received the exemption but didn’t live in the home.

In the only other Supreme Court race, Republicans John Barberis Jr. and David K. Overstreet squared off Tuesday for the chance to face Democrat Judy Cates in November to replace retiring Republican Justice Lloyd Karmeier.

Among the most closely-watched congressional contests was for the seat held by Rep. Dan Lipinski. Challengers focused on the eight-term Western Springs Democrat’s conservative views, including on abortion.

Small-business owner Marie Newman of La Grange made a second attempt to unseat him. The others are first-time candidates Rush Darwish of Palos Hills, who runs a media production company, and Chicagoan Charles Hughes, a gas company operation mechanic.

The Republicans are real estate agent Catherine O’Shea of Oak Lawn, Will County board member Mike Fricilone, and Arthur Jones, a Holocaust denier who won the party nomination two years ago. The Illinois Republican Party has been working against him in the district that covers Chicago neighborhoods and southwest suburbs.

The challenger with the most name recognition is Jeanne Ives of Wheaton, who made an unsuccessful gubernatorial run in 2018. The former state legislator and Army veteran faces Jay Kinzler, a Glen Ellyn transplant surgeon and colonel in the Army reserves.

The Republican primary to unseat first-term Democratic Rep. Lauren Underwood was crowded with seven candidates. Underwood flipped the longtime GOP seat in 2018 when she defeated Rep. Randy Hultgren, who was elected in 2010. Underwood worked in former President Barack Obama’s administration.

The challenger with the most name recognition is state Sen. Jim Oberweis, the dairy magnate who has made unsuccessful bids for governor and U.S. Senate, and state Sen. Sue Rezin, a state lawmaker since 2010.

Republican Rep. John Shimkus’ retirement has led to a crowded field in the state’s only open congressional primary race.

Eight candidates — four from each party — are running in the Republican-leaning territory that runs along a stretch of the Indiana border.

The Republicans are Rossville farmer Darren Duncan, Camargo doctor Chuck Ellington, Mary Miller of Oakland who runs a farm, and Kerry Wolff, an Altamont School Board leader. No candidate has district-wide name recognition, but Miller is married to state Rep. Chris Miller, and Duncan is Vermilion County Treasurer.

Running again for the Democratic nomination is Kevin Gaither, who has a tutoring business. The Charleston man won 29% of the vote against Shimkus in 2018. The others are Mattoon attorney Erika Weaver, Salem pharmacist Craig Morton and Collinsville High School teacher John Hursey.