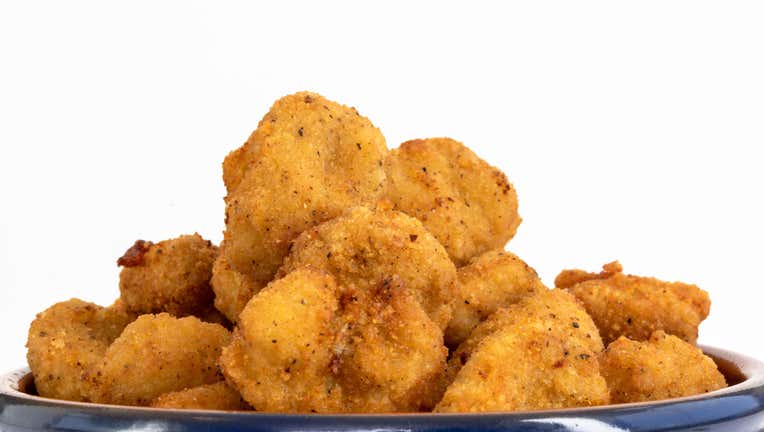 It can be stressful to ensure that a wedding speech will hit all the right notes, so one thoughtful bridesmaid in Ohio gave the bride what her heart truly desired during the big toast — a bouquet full of chicken nuggets.

Jenna Spetz said that her cousin Blair Hardy has long been obsessed with Tyson's dinosaur-shaped chicken nuggets, inspiring the maid of honor to contact Tyson Foods ahead of her cousin’s big day to coordinate a little wedding day surprise, Insider reports. The idea seemed destined to be, too, seeing as Hardy’s now-husband’s name is Adam Tyson, and the union would mark the woman officially joining the Tyson family.

"When I was thinking about my speech, I was trying to come up with something I could surprise Blair with. Nuggets immediately came to mind,” Spetz told the outlet. “I wasn't sure at what medium though or how I would even pull something like that off.

"I really didn't expect my inquiry to go any further than an auto-reply from customer service," she added.

To her amazement, Tyson’s public relations team immediately replied, excited about the idea of collaborating for the Toledo wedding reception.

“[Tyson] went above and beyond my expectations to the point of sending a NUGGET. BOUQUET. I never even thought of that!” Spetz said. “They also had dino-nuggets catered locally and presented them to ALL of the wedding guests so I could do a nugget toast at the end of my speech."

When the October wedding day finally arrived, the creative maid of honor was able to hide the nugget reveal from her cousin. As evidenced in photos since shared to social media, Hardy was equal parts shocked and thrilled to be presented with a nugget bouquet during Spetz’ speech.

"Blair's reaction was priceless! She was grinning from ear to ear and giggling," her proud cousin gushed.

"Blair, of course, ate the dino-nuggets from the toast immediately!" she went on. "I actually think it was pretty ironic that the wedding party and guests had 'chicken or beef' as their dinners and Blair paid extra to have nuggets and fries."

Tyson Foods' president and CEO Noel White also wished the newlywed well in a personalized letter, gifting the new Mrs. Tyson a free year’s worth of Tyson Fun Nuggets and some playful marriage advice, as per Delish.

“Always begin and end each day with kisses and nugs. Remind each other how dino-mite you are together. Double-dipping will only bring you closer. Never go to bed angry (unless he ate the last nugget)," White wrote.

"Wishing you many years of marital bliss, from one Tyson family to another."