Brittney Griner back in US after prisoner swap

She was held in Russia for 10 months — 294 days to be exact. But after a high-profile, high-stakes prisoner swap, Brittney Griner is free and back on U.S. soil.

But after a high-profile, high-stakes prisoner swap, Brittney Griner is free and back on U.S. soil, arriving in Texas on Thursday.

Russian state media shows Griner on a plane, smiling on her way to freedom from a detention center in Russia.

On board the plane, someone asked what her mood was – to which Griner responded, "happy." They also asked if she knew where she was heading at that moment. She said she didn't.

Then later, video shows her on a tarmac in Abu Dhabi, where Griner was released to U.S. officials.

In exchange, the U.S. handed over a notorious Russian arms dealer – Viktor Bout.

President Joe Biden says negotiations to make this happen were painstaking and intense.

"After months of being unjustly detained in Russia, held on her intolerable circumstances, Brittney will soon be back in the arms of her loved ones, and she should have been there all along. This is a day we've worked toward for a long time. We never stopped pushing for her release. It took painstaking and intense negotiations," said President Biden.

Griner's wife spoke at the White House after the exchange.

President Joe Biden is applauding the work to free Brittney Griner. But the prisoner swap left behind Paul Whelan - an American still held in Russia.

"So, over the last nine months, y'all have been so privy to one of the darkest moments of my life. And so today, I'm just standing here, overwhelmed with emotions," said Cherelle Griner. "But the most important emotion that I have right now is just sincere gratitude for President Biden and his entire administration."

The basketball star's teammates and league pushed for her release for months. The WNBA commissioner had an inkling it was about to happen, but didn't want to celebrate too soon.

A plane thought to be carrying Griner landed in San Antonio this afternoon. The plan was to take her to a medical facility there.

In addition, Griner’s parents live in Texas and have been waiting to be reunited with her.

The Federal Bureau of Prisons has confirmed that Bout was serving his time at a prison in Marion, Illinois.

Nicknamed "The Merchant of Death," Bout was one of the world’s most wanted men before his arrest in 2008. He was convicted of conspiring to kill Americans and began his 25-year sentence in southern Illinois a decade ago. 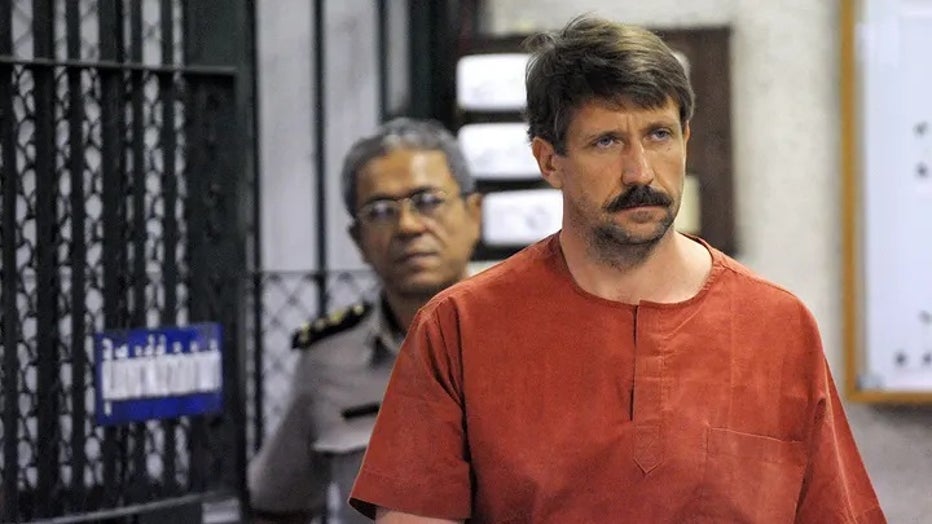 Alleged Russian arms dealer Viktor Bout walks past temporary cells ahead of a hearing at the Criminal Court in Bangkok. (CHRISTOPHE ARCHAMBAULT/AFP via Getty Images)

President Biden says the U.S. is still negotiating for another release: Paul Whelan.

The U.S. Marine veteran, from Michigan, was working as a corporate security executive when he was arrested at a Moscow hotel in 2018 on espionage charges.

U.S. officials had been trying to negotiate to have both he and Griner released, but Biden says Whelan’s case is being treated differently by Russian officials.

"We have not forgotten about Paul Whelan," Biden said. "We are not giving up."

The president reportedly called the family of Whelan before today's announcement. His family released a statement, saying they were happy Griner was on her way home and that the Biden administration made the right decision to bring her home.

Whelan will mark four years of being detained in Russia later this month.