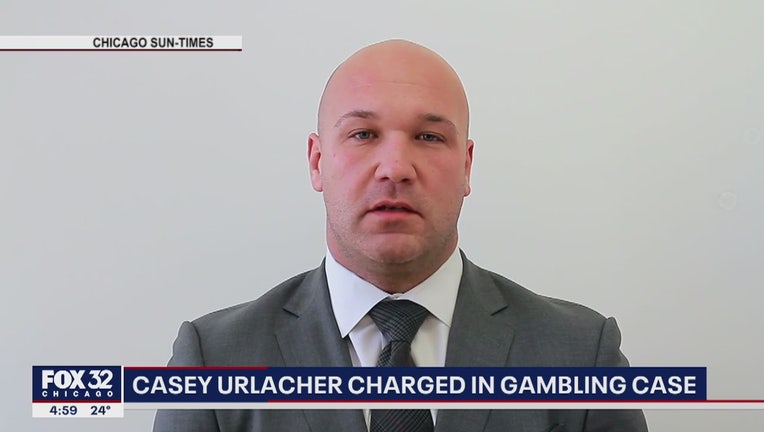 Urlacher, the mayor of the suburban Chicago village of Mettawa, entered his plea with nine others in U.S. District Court. He is charged with conspiracy and running an illegal gambling business. Prosecutors allege Urlacher and the others were part of a ring that raked in millions of dollars.

Urlacher, 40, acted as an agent for the gambling ring. He is accused of recruiting bettors in exchange for a cut of their eventual losses. acting with Urlacher as an agent was Nicholas Stella, 42, a Chicago police officer, prosecutors said. Stella has been stripped of his police powers.

Among the other ``agents” charged were Matthew Knight, 46, of Mokena; Justin Hines, 40, of Algonquin; Todd Blanken, 43, of Cary; Matthew Namoff, 23, of Midlothian; Vasilios Prassas, 37, of Chicago; and Keith Benson, 49, of Lombard.

The ring was headed by 54-year-old Vincent DelGiudice of Orland Park, who paid a Costa Rica-based sportsbook a service fee to use its online platform and recruited gamblers to place wagers on the website, according to prosecutors.

Prosecutors say federal agents searched DelGiudice’s home in April 2019 and turned up more than $1.06 million in cash, $347,895 in silver bars and jewelry, and $92,623 in gold coins. Prosecutors are seeking an $8 million judgment against DelGiudice, who is charged with conspiracy to conduct an illegal gambling business, conspiracy to commit money laundering and money laundering.

DelGiudice pleaded not guilty during Wednesday’s hearing and was released on his own recognizance. DelGiudice’s father, Eugene, 84, was also charged.

Urlacher was elected mayor of Mettawa in 2013 and re-elected four years later. He said at a village meeting this week he intended to stay on as mayor while he fights the charges. However, he did resign from his position on the Illinois Civil Service Commission, to which he was appointed in 2013 by then Gov. Pat Quinn.