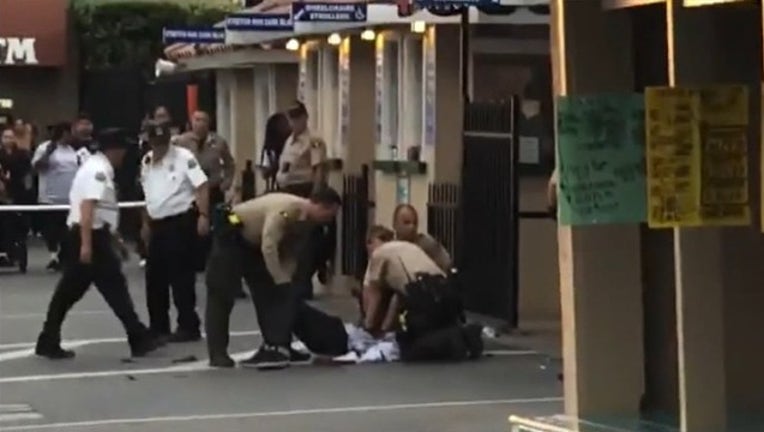 A man is taken down by San Diego sheriff's deputies after they say he fired a gun upon learning there were no more Ice Cube tickets at the Del Mar Racetrack. Sept. 2, 2018 Photo: KSWB/Fox San Diego

DEL MAR, Calif. - A San Diego sheriff’s's deputy shot a man at the Del Mar racetrack who officials say pulled out a gun and fired it at the ticket window after he learned that rapper Ice Cube's concert had been sold out.

In a tweet, the sheriff said that deputies arrested 22-year-old Daniel Elizarraras of Escondido following the shooting.

The sheriff’s department said that Elizarraras went up to the ticket window of the Thoroughbred Club on Sunday at 6:40 p.m. and was told that there were no more tickets left for Ice Cube’s concert.

The racetrack tweeted that the concert had been sold out just three minutes prior to that.

“An argument ensued,” the sheriff said in a statement. “The man pulled out a silver plated semi-automatic handgun and fired several shots into a crowded area.”

Video provided by Fox San Diego showed deputies struggling with a man in a white shirt on the ground.

Elizarraras was taken to Scripps Memorial Hospital in La Jolla and as of Monday, was listed in stable condition and is expected to survive.

Following the shooting, the concert moved “forward as planned,” the racetrack said.