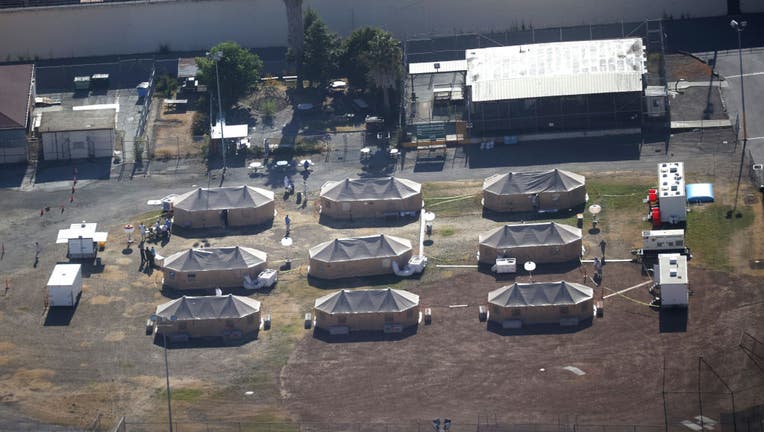 SAN QUENTIN, CALIFORNIA - JULY 08: A view of a new emergency care facility that was erected to treat inmates infected with COVID-19 at San Quentin State Prison on July 08, 2020 in San Quentin, California. Over 1,400 inmates and staff at San Quentin S

SACRAMENTO, Calif. - State prison officials say as many as 17,600 California inmates may be released early due to the coronavirus, 70% more than previously estimated and a total that victims and police say includes dangerous criminals who should stay locked up.

The releases also are causing consternation as probation officers and community organizations scramble to provide housing, transportation and other services for inmates who may pose a public health risk because several hundred have been paroled while still contagious.

“It has just been a total madhouse, quite frankly, and we’re doing this in the midst of a pandemic,” said Karen McDaniel, the statewide transportation and services liaison between community groups and corrections officials.

By the numbers: A look at who has died of coronavirus in California prisons

Among those released was Terebea Williams, 44, who served 19 years of an 84 years-to-life sentence for first-degree murder, carjacking and kidnapping. She was freed last week after being deemed at high medical risk for the virus.

Williams’ victim, Kevin “John” Ruska, picked her up to drive her to work in 1998 but the pair argued and Williams forced him into the trunk of his own car at gunpoint. She shot him when he tried to escape, then brought the wounded man more than 700 miles (1,126) kilometers) from Tacoma, Washington, to a motel in Davis, California. There she gagged him and tied him to a chair. He died from the infected wound.

“Why is an inmate’s rights more important than a victim’s?” said his outraged sister, Dena Love.

Yolo County District Attorney Jeff Reisig, whose office prosecuted Williams, and the advocacy group Crime Victims Alliance complained that victims and prosecutors are given little notice and no opportunity to object to the releases.

The virus is spread by coughs and sneezes and can quickly sweep through a prison setting. So far 51 inmates have died and there have been more than 8,400 cases among prisoners.

Nearly 2,000 state prison system employees also have been infected and eight have died. The latest, Sgt. Seeyengkee Ly, who worked at Valley State Prison in Chowchilla, died on Aug. 2 from pneumonia complications after contracting COVID-19.

Officials have been under intense pressure from advocates, some state lawmakers and two federal judges to release more inmates, particularly after a botched transfer of infected inmates into San Quentin State Prison led to the state’s worst prison outbreak. Nearly 170 inmates still are infected there and 23 died, including 11 on death row. More than 2,000 have either recovered or were released while infected.

Demonstrators who chained themselves to the fence outside Gov. Gavin Newsom’s home last week said he has “presided over dozens of preventable deaths in state prisons” by not freeing far more inmates.

The first 3,500 inmates were freed in April to create space in crowded prisons and 6,900 more were deemed eligible for release in early July. Officials said other inmates would be eligible under different release programs but couldn’t provide an estimate.

In a filing last week with a federal judge who oversees one of the major lawsuits facing the prison system, officials increased the estimated total of releases from 10,400 to 17,600. However, prison officials say Corrections Secretary Ralph Diaz is likely to block the release of about 5,500, in part because many are serving life prison sentences.

Nationwide, more than 100,000 people were released from state and federal prisons between March and June, a decrease of 8%, according to an analysis by The Marshall Project and The Associated Press.

California Police Chiefs Association president Eric Nuñez said he understands the urgency of reducing the prison population but is alarmed by the release of some violent criminals “without a consideration for the larger impact on public safety.” He said the chiefs want to work with prison officials on improving the decision-making process.

All told, corrections officials plan to release 11,500 inmates by the end of August, an estimate that brought McDaniel to near tears as she recounted some of the struggles to find them temporary housing. She is the founder and executive director of Place4Grace, which runs literacy and visitation programs in 16 of the state’s 35 prisons.

The burden is often on inmate relatives, who often rush to remote prisons with little notice, then line up in their vehicles for hours as they await their loved ones’ release.

It’s her job to arrange transportation for those who don’t have other arrangements, particularly inmates who are supposed to quarantine because they are released while they are still infected with COVID-19. They may be sent to hotel rooms through a program run by the corrections department and two other state agencies called Project Hope.

But that leaves loopholes, McDaniel said.

One infected inmate was told not to leave his Sacramento motel room during a two-week quarantine. ”We had to send somebody there to get him clothes, to get him food,” she said.

In another example, she said state officials asked her community organizations to launder clothing for multiple inmates sequestered at a hotel.

“It’s just been a heartbreaking task from beginning to end,” she said. “It didn’t have to happen like this.”

The good news, McDaniel said, is that through a lot of effort officials have been able to avoid what Newsom said was his greatest fear from mass releases — leaving infected ex-convicts homeless.

“There is no one coming out that does not have a bed to go to,” McDaniel said. “No one is being dumped on a street corner anywhere as a transient. That is not happening.”

The bad news is there is no way to prevent infected inmates from leaving their rooms. The state has to date released nearly 300 inmates with active infections.

Inmates are tested within seven days of their scheduled release, and those who test positive are barred from leaving early, said corrections department spokeswoman Dana Simas. But inmates who reach their regular parole date must be freed, even if they are infected.

“We can’t force people to quarantine, we can only offer them voluntary services like Project Hope,” Simas said.

Probation officials now have just days instead of the normal months to prepare re-entry plans to provide a soon-to-be-released inmate with housing, transportation, drug or behavioral treatment, health care and training or a job.

“Our folks are working overtime to make all of the connections,” said Chief Probation Officers of California executive director Karen Pank. ”But I’m not going to lie, it’s a tough, tough challenge.”