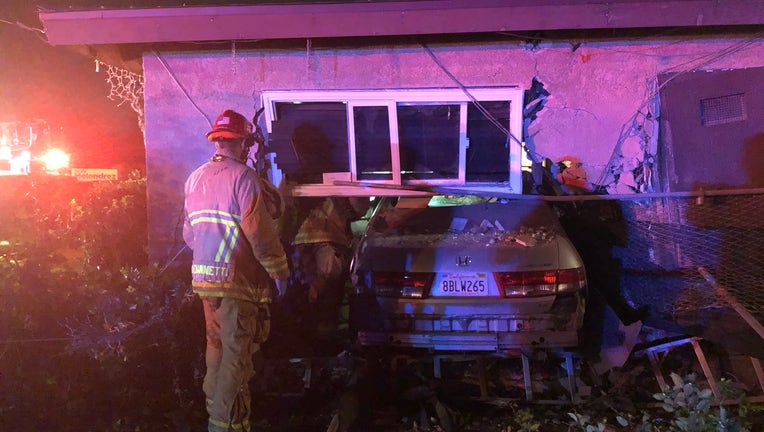 RIVERSIDE, Calif. - A man sleeping in his bedroom was pinned against a wall when a car smashed through the house in Southern California, authorities said.

The man suffered only minor injuries after the vehicle barreled over a power pole, through two yards and into the home in Riverside around 1 a.m. Saturday, fire officials said.

The car almost completely entered the structure, rendering it uninhabitable, the Press-Enterprise reported . There was nothing between the wall and the car except the resident, Fire Department Battalion Chief Bruce Vanderhorst said. Firefighters used the Jaws of Life, a tool normally employed to cut open smashed vehicles, to free the man.

"(He) got very lucky," Vanderhorst said.

Police arrested the driver of the car, a 22-year-old man. He could face charges including driving under the influence of alcohol causing injury and DUI with a blood-alcohol level higher than .08 causing injury, both felonies, the newspaper said.

Damage to the house was estimated at $200,000. Four adults were displaced and went to stay with with relatives.