Romaine lettuce is one of the ingredients in the salad kits, and officials are still determining whether this E. coli outbreak is related to a current outbreak linked to romaine lettuce from the Salinas, California, growing region.

WASHINGTON - The U.S. Centers for Disease Control and public health and regulatory officials in several states are investigating a multi-state outbreak of E. coli infections that have been linked to Fresh Express Sunflower Crisp chopped salad kit, and the CDC is urging anyone who may have purchased one of the salad kits to throw it away.

The CDC reports that there have been eight reported cases of E. coli across three states, and three patients have been hospitalized due to their illnesses. One person developed hemolytic uremic syndrome, which is a type of kidney failure. No deaths have been reported.

The infections have affected people in Minnesota, North Dakota and Wisconsin.The CDC notes that a recall has not yet been issued for this product.

“Do not eat or sell Fresh Express Sunflower Crisp Chopped Salad Kits with this identifying information: UPC 0 71279 30906 4, beginning with lot code Z, and a best-before date up to and including 07DEC19. This information is printed on the front of the bag in the top right corner,” the CDC urged. 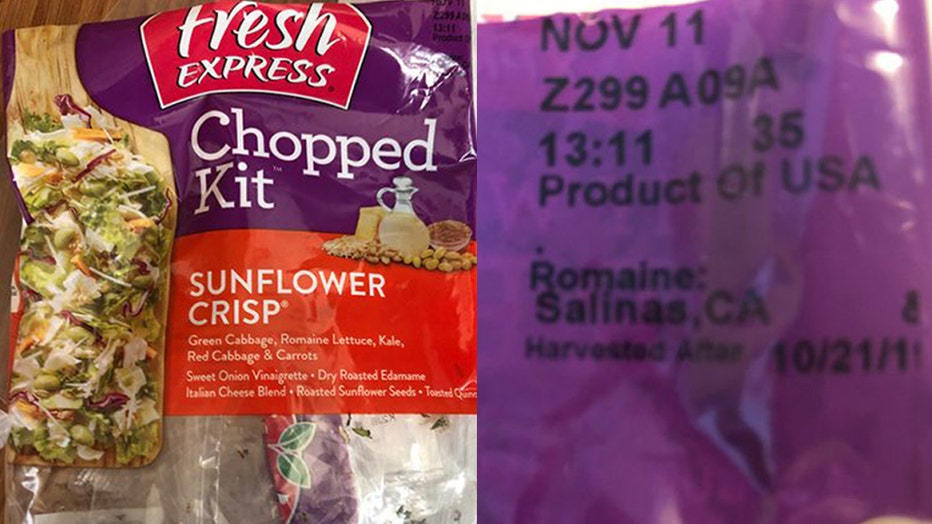 LEFT: The front, outer packaging of the Fresh Express Sunflower Crisp chopped salad kit which has been linked to an E. Coli outbreak. RIGHT: Identifying information for the salad kits can be found on the front of the bag in the top right corner.

The CDC’s investigation has led officials to believe that the Fresh Express Sunflower Crisp chopped salad kits are “a likely source of this outbreak,” and the agency is working to determine which particular ingredient in the salad kit was contaminated.

Romaine lettuce is one of the ingredients in the salad kit, and officials are still determining whether this particular E. coli outbreak is related to a current outbreak linked to romaine lettuce from the Salinas, California, growing region.

The CDC said that preliminary findings from its investigations indicates that romaine lettuce in the salad kits eaten by some of the sick people likely came from the Salinas growing region, and the CDC is concerned that some kits from the same batch may still be in people’s homes.

The CDC urged anyone who may have these kits throw them away and to wash and sanitize drawers or shelves in refrigerators where the kit was stored.