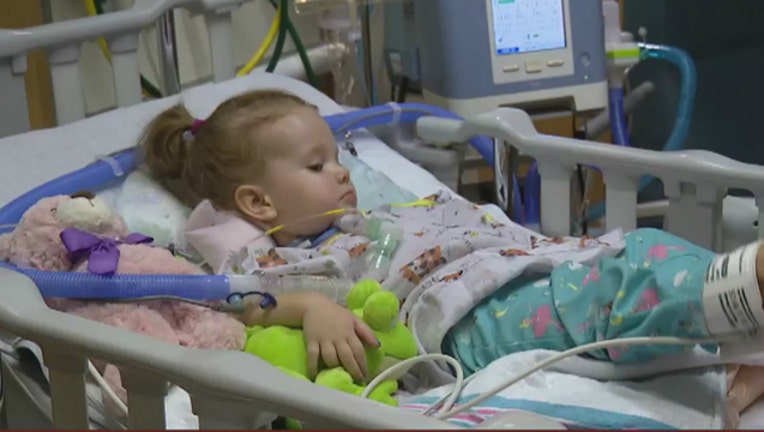 CHICAGO (Fox 32 News) - The Centers for Disease Control and Prevention (CDC) has confirmed that a Batavia toddler being treated at Lurie Children's Hospital in Chicago is battling Acute Flaccid Myelitis (AFM), which is a rare polio-like disease.

And now, a second case from the Chicagoland area is still waiting to be confirmed.

Julia Payne, 2, has been getting treatment at Lurie’s for the past month. Her parents say she was a spunky toddler, just before the illness paralyzed her.

Meanwhile, an 8-year old from Chesterton, Indiana is also being treated at Lurie’s for symptoms consistent with AFM. Her father said she has some paralysis and a partially-collapsed lung.

The condition looks a lot like the common cold at first, but often leads to paralysis and trouble breathing. Doctors aren't sure what causes it, but there is no cure.

Melaney Arnold of the Illinois Department of Public Health says health care providers in the state have reported nine cases of AFM. She says the findings of health care providers are preliminary and only the Centers for Disease Control can confirm the diagnosis. Until then, doctors are treating the cases as if they are AFM.

The 8-year-old from Indiana will also eventually be moved to Shirley Ryan, but needs to get stronger at Lurie’s before that happens.

Thirty-eight cases have been reported across 16 states this year, including six cases in Minnesota.

Between August 2014 and August 2018, the CDC received information on 362 cases of AFM nationwide.

GoFundMe pages have been set up to help both families ease their financial burden while their daughters are in the hospital.