For decades, Erica Langley felt in complete control of her body. She lived an extremely healthy lifestyle. But in 2018, as she was lying in bed one night, she noticed a lump on the underside of her breast.

CHICAGO - A Chicago body builder is sharing her story of beating breast cancer.

For decades, Erica Langley felt in complete control of her body. She lived an extremely healthy lifestyle.

But in 2018, as she was lying in bed one night, she noticed a lump on the underside of her breast.

"I called my fiancé and told him what I had found, and he tried to ease my worries by saying ‘Oh you probably just pulled a muscle in your chest,’" Langley said.

She was in the process of preparing for one of the biggest competitions of her life.

"I would hear stories [about breast cancer] and think, ‘Oh that's so sad.’ But never once did I think it could happen to me," she said.

After rushing to an urgent care facility, she was told she needed a mammogram as soon as possible. 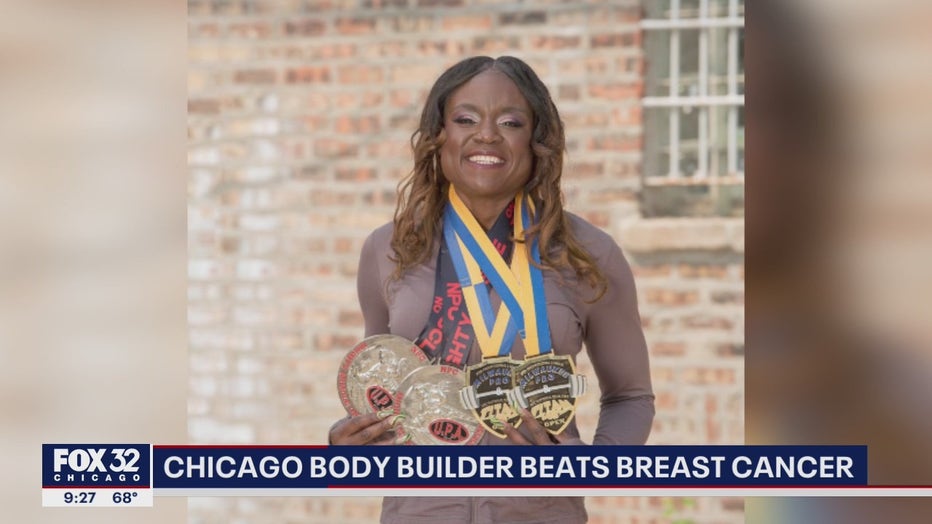 At 38-years-old, Langley was diagnosed with breast cancer.

"One of the physical attributes that in my mind defines me as a woman, not only are you telling me there's something wrong with that attribute, but it needs to be removed," Langley said.

Her doctor recommended genetic testing, because of her young age.

"The genetic mutation that was identified in her specifically, it could have a childhood age of onset," said UChicago Medicine Lead Genetic Counselor Feighanne Hathaway. "We've seen children at the age of five get a brain tumor with this mutation."

There are nine different genes that can cause cancer. Langley has a mutation of the P-53 gene, making her susceptible to many forms of the disease.

"She has what we call a de novo mutation meaning it just happened at conception, so it's not in her family actually. But now her children are at risk because she now carries it in every cell of her body," Hathaway said.

The revelation led Erica to have both breasts removed. After two surgeries and two years of intense cancer treatment, Langley picked up her weights again.

"For me, this competition in many ways, for a lack of a better term, it's been my big F-U to cancer," she said of the National Physique Committee championships she competed in, in May.

With the breast cancer ribbon etched on her swimsuit, she stepped out on stage.

"I was triumphant in the face of something that has overtaken many," she said.

This October, as she marks Breast Cancer Awareness month as a survivor, she wants others to know her secret to success.

"Don't allow yourself to stay in that dark place…Tell yourself that you are going to be triumphant…Your mental health is just as important as your physical health," Langley said.

Genetic testing is available to anyone. It costs around $250 and is covered by most insurance plans.