A week before Christmas, 33-year-old Irene Chavez was at a bar on Chicago's South Side when she was arrested for simple battery. A few hours later, Chavez was found hanged in her police cell, her family says they were told by cops.

An Army veteran died while in Chicago police custody and her family is demanding to know what happened the night of her arrest.

"My sister was found hung in the 3rd District police department, while in holding. While bounded, apparently. And I'm not really sure how that could happen," said Iris Chavez during a news conference Monday outside the police station at 7040 S. Cottage Grove Ave.

Family gathered outside the station to set up a makeshift memorial to honor Irene and seek answers. They say police have offered few details about the circumstances surrounding Chavez’s death.

"I asked detectives questions, and I hit a red light, a stop sign, a door every single time," Iris said.

Irene and Iris' parents stood nearby outside the station. The mother, Cynthia Chavez, dropped to her knees and prayed on the wet pavement.

Irene Chavez, who did tours in Afghanistan and Kuwait, was arrested on misdemeanor battery charges on December 18 at a South Side bar.

At 3:20 a.m., the Civilian Office of Police Accountability (COPA) says it received notification of an alleged suicide attempt at the 3rd Police District Tactical Office in the Grand Crossing neighborhood, where 33-year-old Irene was in custody.

Eight hours later, she was pronounced dead at University of Chicago Hospital.

Since then, the Chavez family says it has gotten no answers from the police as to how this could have happened while Irene was in police custody.

Her sister says Irene had been suffering from PTSD and that the family has thus far been given an "empty story" by detectives about what led to her death.

"I have to get answers. Without a redacted report I got at the Chicago headquarters," Iris said. "No information. No narrative, no nothing."

Iris said police gave her a heavily redacted report the morning her sister died. She said they told her that her sister had hanged herself with a shirt.

Irene was at the Jeffery Pub on South Jeffery, where she was arrested for simple battery, her sister said. But the sister said she knows almost nothing about the circumstances of the arrest, including what led to it.

"If you danced with her that night at Jeffery Pub or just bought her a drink or she bought you one, come forward. Nobody is giving me answers," Iris Chavez said. 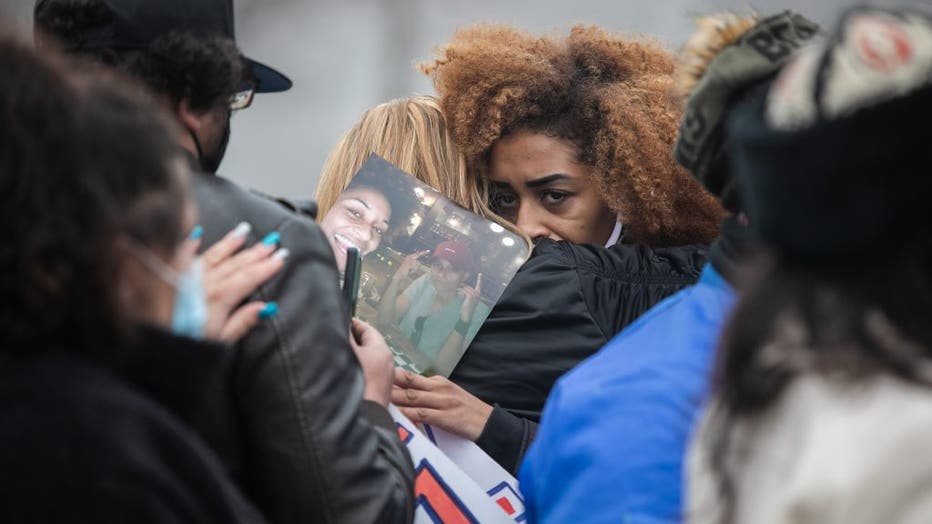 Iris Chavez, sister of Irene Chavez, is embraced outside the Grand Crossing police station Monday morning as family demanded answers about the death of Irene Chavez while in police custody this week. Pat Nabong/Sun-Times

Irene had been out of the military for about three years and was between jobs after recently moving back to Chicago from Texas, her sister said. She’d had a variety of jobs since leaving the military and hoped to work full time in community farming, friends said.

Stroth called on Mayor Lori Lightfoot and Chicago Police Supt. David Brown to help the Chavez family in their search for answers.

"We know there is video that exists," Stroth said. "We know Iris shouldn’t get a redacted police report. The family wants answers. The family is demanding truth."

Beneath a tree outside the police station, family and friends set up a temporary memorial, with photographs of a smiling Irene Chavez, Christmas decorations, sports jerseys from her favorite football team, the Green Bay Packers, along with two dozen candles in the Packers colors — green and yellow.

The family walked through the front doors of the police station Monday to see if they could have some of their questions answered. They were politely told by the watch commander to contact the city’s legal affairs department or the Civilian Office of Police Accountability.