More than 30 Arab store owners in Chicago are demanding action after one store was ordered to shut down permanently.

CHICAGO - Ahmed Mohsin’s East Garfield Park gas station has been ordered closed by the city — and he doesn’t know why, or when he might be able to reopen.

A man was shot and killed Tuesday outside the Citgo gas station at 3759 W. Chicago Ave. Mohsin, co-owner of the gas station, said the Chicago Police Department asked the station to close voluntarily for two days to aid the investigation.

But on Wednesday, the gas station and its Quik Mart were ordered closed; the notice from Chicago Police Supt. David Brown, taped to the door, cited a "public safety threat." The owners were not told when they will be able to open again, Mohsin said.

"Now I feel like I am a victim, with a closed business and questions I cannot answer," Mohsin said Thursday morning.

Mohsin said the company will meet an attorney for the city on Monday to hear terms for reopening, and if Citgo doesn’t agree to those terms, they will present their case at a probable cause hearing on Tuesday. If the city prevails, the station could be forced to close for another six months, Mohsin said.

And even if he is successful, Mohsin said, the timeline for re-opening is still unclear, as the station must remain shut pending another inspection.

More than 30 Arab store owners in Chicago are demanding action after one store was ordered to shut down permanently.

Mohsin, joined by members of the American Arab Chamber of Commerce and local gas station owners and employees, held a news conference outside the Quik Mart on Thursday to demand his station be reopened.

Hassan Nijem, president of the American Arab Chamber of Commerce, said Mohsin’s situation is part of an ongoing issue of Arab American- and Muslim-owned stores being closed by the city, ostensibly because of crime.

From June through September, the Arab American chamber counted 150 businesses closed, most Arab- and Muslim-owned, said Ray Hanania, a spokesman for the business group. They have gotten around a dozen calls since then about more recent closures, Hanania added. 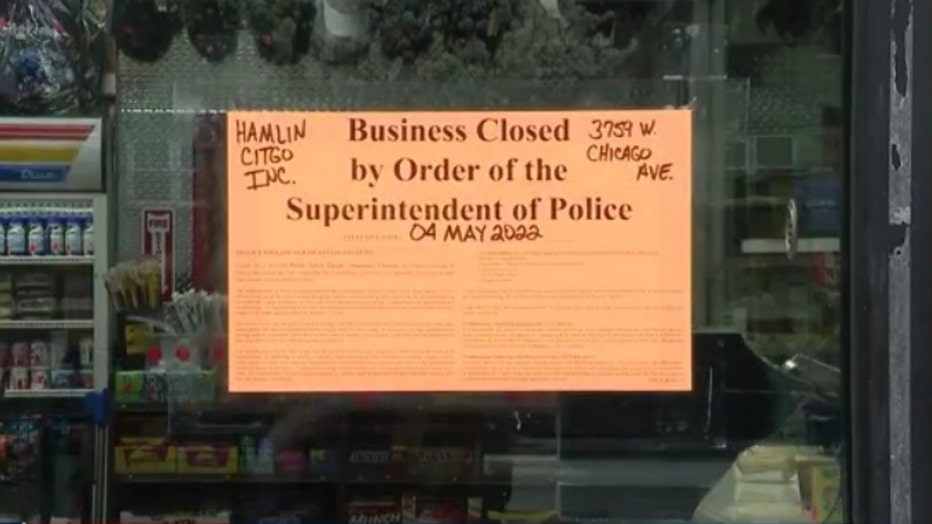 A spokesperson for the Department of Business Affairs and Consumer Protection said the city is "committed to the highest level of public safety at buildings and businesses to ensure safe and legal operations throughout the city," and works to provide business support programs.

Since 2004, the Citgo has been issued four "Notices to Correct" and 18 "Administrative Notice of Violations," which involved tobacco and expired food, according to the department spokesperson. The most recent violation was in 2021.

Mohsin said he feels like he is being unfairly blamed for a crime unrelated to his business, after his employees risked their health and safety to stay open during the pandemic.

"We are left with the assumption that we are being held responsible for the violence that started on the city public way, and overspilled into our business," he said.