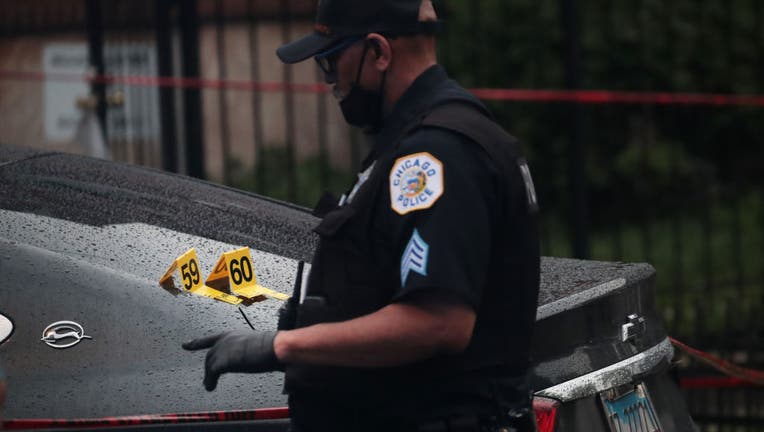 Shell casings labeled 59 and 60 rest on a bullet-riddled car as police investigate the scene of a shooting in the Auburn Gresham neighborhood on July 21, 2020 in Chicago. (Photo by Scott Olson/Getty Images)

CHICAGO - Chicago reached 700 homicides this year during a violent weekend that saw six killed and 46 wounded — the second time the city reached the milestone in two decades.

The 700th homicide was a man killed in a quadruple shooting early Sunday on the Far South Side, according to records kept by the Chicago Sun-Times.

He was standing with a group on a sidewalk in the 700 block of East 101st Street when shots rang out, according to Chicago police.

The man, 28, was shot multiple times at 12:40 a.m. and died three hours later at a hospital, according to police and the Cook County medical examiner’s office. Two women, both 30 years old, and a 25-year-old man were also shot, police said. They were listed in fair or good condition.

About 93% of homicides in 2020 have been shootings, according to the Sun-Times’ numbers.

Homicide victims are disproportionately Black males, according to medical examiner’s public records. More than 88% of victims in 2020 are men, and 78% of total victims are Black.

The medical examiner’s office, which tracks homicides by the date of death instead of the time of injury, has recorded 721 homicides so far in 2020. That number includes police-involved shootings and other self-defense shootings that the Sun-Times’ count omits.