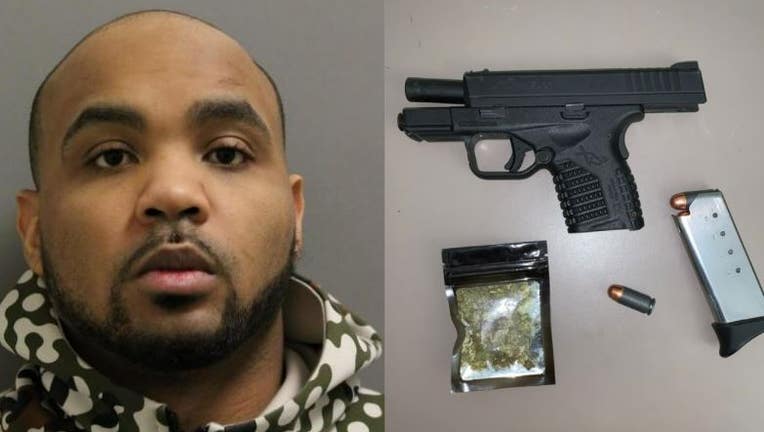 ORLAND PARK, Ill. - A man was arrested in Orland Park Wednesday for having a loaded gun and obstructing police officers.

While surveilling, a Jeep, driving extremely fast and revving the engine, pulled into the lot and parked two parking spaces away from the vehicle officers were watching, authorities said.

A man exited the Jeep, reached down and appeared to place something back inside the vehicle.

The man then walked away from the vehicle, authorities said.

Orland Park officers approached the vehicle and spotted cannabis sitting in the cup holder of the vehicle.

About an hour later, the man came back to his Jeep. At that time, officers approached the Jeep and asked the driver to exit, authorities said.

The driver allegedly refused to comply and tried to start the vehicle, however, it wouldn't start.

Officers then attempted to open the driver's door, which was locked.

Officers eventually used a glass breaking tool and broke the driver's side window.

The driver then exited the vehicle and was taken into custody.

The driver was identified by police as Matrice Smith, 28, of Chicago.

He was wearing a Louis Vuitton ‘satchel bag’ underneath his jacket, which allegedly had a loaded Springfield .45 caliber handgun inside, authorities said.

According to authorities, Smith does not have a CCL or FOID. Smith also has prior felony convictions for aggravated battery to a police officer and two armed robberies.

He was charged with unlawful possession of a weapon by a felon and obstructing a peace officer.

Smith appeared in court Thursday and was issued a $50,000 bond.