It is all part of a Chicago man's idea to light up King Drive on the South Side -- an idea that's now getting national attention.

CHICAGO - Dozens of volunteers were out on the streets Wednesday decking out hundreds of homes with some holiday lights, bows, ribbons and garland.

It is all part of a Chicago man's idea to light up King Drive on the South Side -- an idea that's now getting national attention.

We all think of the Mag Mile or State Street this time of year for the best Christmas light show. Well, the organization “My Block, My Hood, My City” wants the South Side to have the same curb appeal.

Some neighborhoods in Chicago have become synonymous with police lights and sirens. But Jamal Cole, a native Chicagoan, wants to change that. He wants the South Side to shine for a different reason.

"We want to see holiday lights instead of helicopter lights on King Drive,” he said. "We did 100 homes last year. This year, 250 homes."

Cole founded the non-profit “My Block, My Hood, My City." 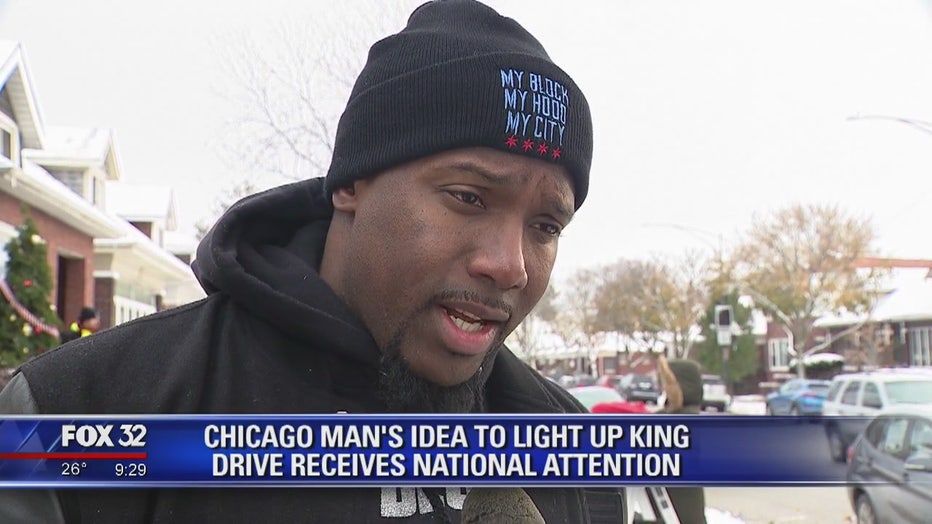 2018 was the first year that volunteers from all across Chicagoland helped light up 6 miles of King Drive using countless strings of lights, 800 ribbons and more than 600 feet of garland.

This time around, Cole is getting national television exposure, expanding his initiative to cover 8 miles as far south as Roseland and as far north as Bronzeville.

It will take many volunteers to pull the feat off, and even more decorations.

"You can go to our website…you can donate lights, ornaments and you can request for your home to get the lights,” Cole said.

The lights are free for homeowners who will also get a check for $25 to cover any additional electricity costs.

Lena Bivens says she had no problem offering time to help. It is a change she believes many neighborhoods need to see.

Decorating will happen on December 1 from noon to 3 p.m. Everyone will meet up at Nat King Cole Park on 85th and King Drive.