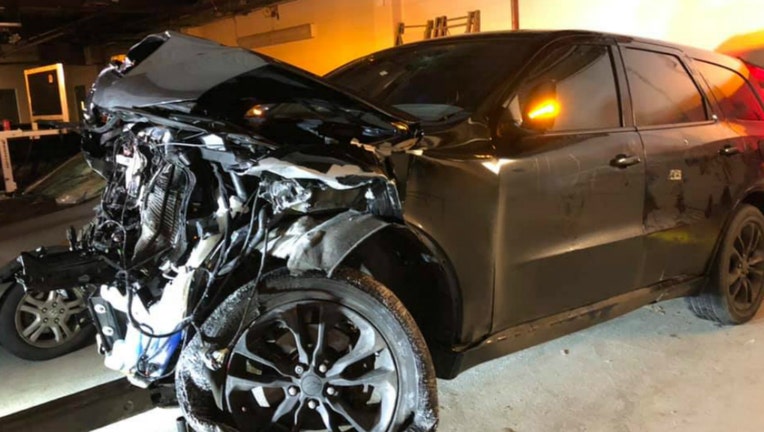 Three juveniles and two men from Chicago are charged in connection to a Feb. 16, 2020 pursuit involving a stolen vehicle in Lisle. | Lisle police

CHICAGO - Two men and three minors from Chicago are charged with fleeing from Lisle police in a stolen vehicle at over 100 mph Sunday before crashing near the Morton Arboretum.

An officer tried to pull over the “acting suspiciously” vehicle about 2:30 a.m. after responding to a call of several males trying to open car doors near Ogden and Yackley avenues in Lisle, Lisle police and the DuPage County state’s attorney’s office said in statements.

The car drove off and swerved between lanes to lose the officer, prosecutors said. The officer followed, clocking the vehicle’s speed at over 110 mph from I-355 to westbound I-88 until it crashed into a light pole on the exit ramp to Route 53.

Officers arrested the five occupants within five minutes of the crash.

Elijah Castle, 20, and Aaron Moon, 18, appeared in court Monday on counts of aggravated possession of a stolen vehicle and aggravated fleeing and eluding, prosecutors said. Castle was ordered held on $250,000 bail, while Moon was held on $100,000 bail.

The teens face the same charges and are expected at a juvenile detention hearing on Tuesday, prosecutors said.

Castle and Moon are due back in court March 16.