Capone lived in a brick two flat in Park Manor with his family in the 1920’s, and now his grandchildren are auctioning off nearly 200 pieces of his memorabilia.

Capone’s three granddaughters say it’s time to let go of some of the gangsters personal effects.

"My sisters and I are getting older. We didn't want these things to be left and people who wouldn't know what they were. What the story behind each of them is," said Diane Patricia Capone, granddaughter of Al Capone.

Everything from guns, to jewelry, to furniture, ceramic figurines and a three page hand-written letter from Capone to his son, that he wrote while imprisoned at Alcatraz.

"Papa many times had to protect himself. That was his number one gun for protection as far as he was concerned," said Diane, while showing off one of her grandfather’s guns.

The online auction will start Oct. 8 and it’s being conducted by an auction house in Sacramento, California, which is near where one of the granddaughter’s now lives.

While many of the items paint a picture of a wealthy, family loving man, the real Capone was a ruthless killer who led one of Chicago’s biggest bootlegging gangs and likely ordered the assassination of some of his rivals in the Saint Valentine’s Day Massacre. 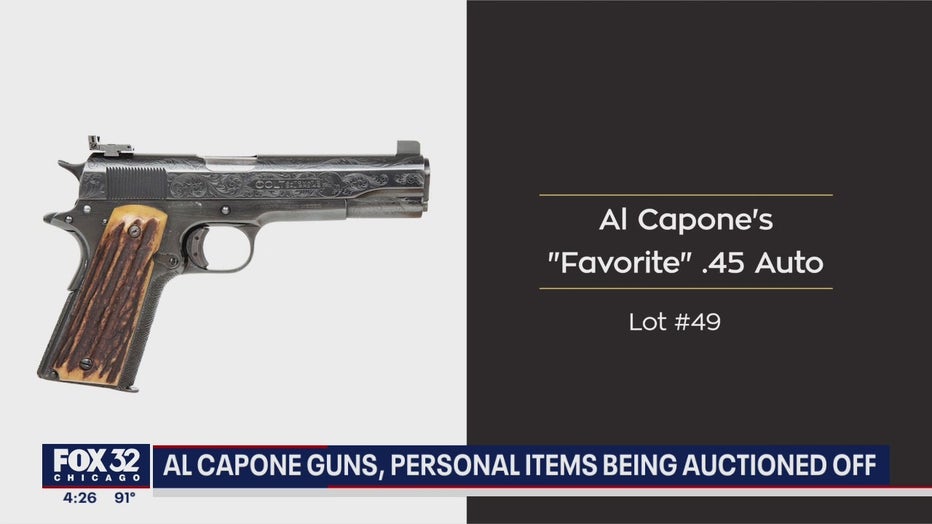 Even though he’s been dead nearly 75 years, Capone remains one of Chicago’s most famous figures, the feared mob boss who used bullets and bribes to run a sprawling bootlegging empire during prohibition.

"I was excited to hear that some of Capone’s stuff was going for sale just because I wanted to see it. He led a pretty secret life," said Chicago author Jonathan Eig, who wrote a book about the famous gangster called "Get Capone."

Why does Capone remain such a captivating figure?

"What fascinated people about him was that he lived this life brazenly," Eig said. "He said ‘I am an outlaw, what are you going to do about it?‘ And for a dozen or so years he got away with it."

Brian Witherell owns the auction house that will be auctioning off the Capone items.

"I think this is an extraordinary event they will go down as one of, if not the most important celebrity auctions in recent history," said Witherell.