Two Chicago SWAT police officers are being awarded for last month's dramatic rescue of a man from the icy waters of Lake Michigan.

CHICAGO - They plucked a drowning man out of the icy waters of Lake Michigan.

A special ceremony was held Friday afternoon at police headquarters for the two Chicago SWAT officers who responded to a call for help on February 15 of a man slipping on the ice at Chicago Avenue and plunging into the frigid lake.

"Right place right time. We were lucky to be able to pull up and see him and get to him in time,” said Peter Jonas.

"We laid down on the ice and started pulling him out. Tried to form a human chain. Just grab ahold of any part of his body we could get just to get him out of the water,” said Shane Coleman.

Which they did, as the man was slipping in and out of consciousness. Paramedics rushed him to the hospital where he was stabilized and released.

A pair of Chicago police officers pulled a man out of freezing Lake Michigan waters Saturday near the Gold Coast.

"There are about a hundred drownings, roughly, in the Great Lakes themselves every year...and they're virtually all preventable,” said Jamie Racklyft of the Great Lakes Water Safety Consortium.

Racklyft presented the officers with awards and says it's only going to get worse. That's because Lake Michigan water levels are historically high, making the lake more dangerous than ever.

"With the higher water levels a lot of that wave energy comes in closer to the shore.  That creates the rip currents and other dangerous situations,” Racklyft said. 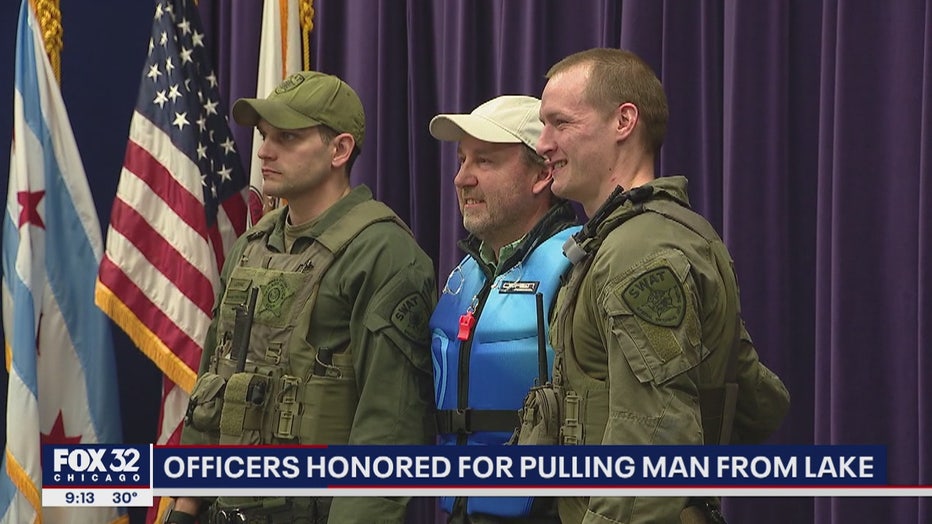 While the officers are pleased with their save, their boss says it's what any cop would do.

"This is the same sort of thing that every single police officer in the city of Chicago does day in, day out without thought,” said 20th District Commander Sean Loughran.

"You can never plan for that type of situation. Just try to make the best of it--try to get it done, you know?" Coleman said.