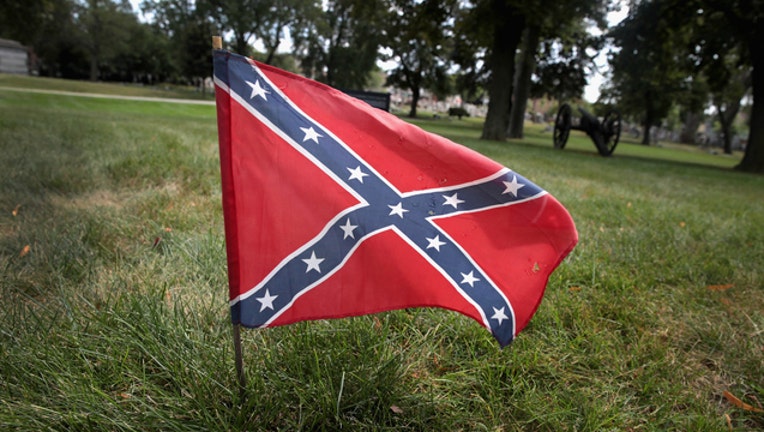 GETTY A Confederate Navy jack flag sits at the base of Confederate Mound, a memorial to 4,000 Confederate prisoners of war who died in captivity and are buried around the monument, on August 23, 2017 in Chicago. (Photo by Scott Olson/Getty Images)

WAUCONDA, Ill. (AP) - A Civil War reenactment at a northeastern Illinois forest preserve is back on after the event was temporarily canceled by a county official over questions of its value, as well as the use of the Confederate flag.

Lake County Forest Preserves District President Angelo Kyle announced Wednesday that Civil War Days will still be held at Lakewood Forest Preserve in Wauconda from July 13-14, The (Waukegan) News-Sun reported. Kyle noted contractual obligations for the district's largest event, which has been held for 27 years and can draw up to 3,000 people.

The announcement comes two days after Kyle canceled the event, raising concerns about the reenactment not telling the victims' perspective and featuring many Confederate flags.

Forest preserve officials haven't objected to the use of Confederate flags in the reenactments in the past, saying they're being used in a historical context.

Kyle said he still hopes the event will come to an end.

"For 27 years, you have the same reenactment every year," he said. "What new can you learn from it?"

Kyle objected to the event not including the perspective of the victims of slavery. He called the Civil War the "most gruesome, pathetic, despicable war on American soil," and questioned why the reenactment is the largest event held in the forest preserves district.

"Why isn't (the largest event) pertaining to the mission of the forest preserve -- preserving our natural resources and environmental quality of Lake County?" he said.

Wayne Carle, who helps plan the event and is part of the 1st Illinois Battalion reenactment group, said they put on the show to "try to keep history alive."

"We're not doing this just to play army," he said.

Carle said criticism of the reenactment comes from people who want to rewrite history, or who are bringing 21st century thinking to a 19th century event.

Carle said he's occasionally seen black reenactors, but he acknowledged that there are few in Illinois.

"I don't know if its pressure from the community or what, but there is still a few of them out there," he said.