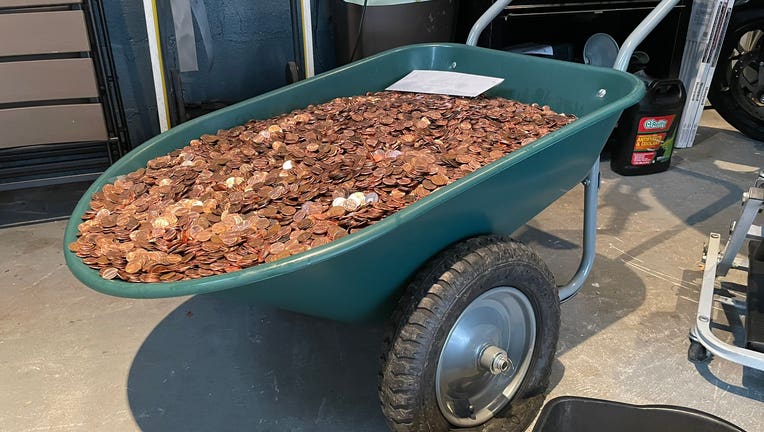 FAYETTEVILLE, Ga. - A Fayetteville man no longer has to spend hours cleaning the oil or grease from more than 90,000 pennies which he said was dumped in his driveway as his last paycheck from his former employer.

Andreas Flaten said a load of pennies totaling a little more than $915 was unceremoniously dumped at his home in mid-March after fighting for about four months to get his final paycheck from his previous boss. He said it came with an envelope that contained his last paystub and a personal message reading "f--- you."

Flaten said he had been trying to clean the film of grease or oil that coated them with dish soap, vinegar, and water for about an hour or so each night since copper-coated coins arrived. They sat in a wheelbarrow, which tires deflated under the 504 pounds of currency, in his garage. He said he was able to clean up to about $5 worth each night.

Tens of thousands of pennies were found on a Fayette County man's driveway.

Now, more than a week later, Flaten no longer needs to put in double time for his last paycheck thanks to Coinstar. Yes, the company that owns those coin-counting and cashing machines in grocery stores and shopping centers across American came and picked the pennies up on Thursday. But the company also decided Flaten had been through enough. Company executives rounded up the check to a full $1,000 and then turned around to donate the same amount in his name to two charities of choice.

"When we heard about Mr. Flaten’s penny problem, we were happy to offer our assistance," Jim Gaherity, CEO of Coinstar was quoted in a release on Thursday. "Coinstar has been in the coin business for 30 years and we process approximately 41 billion coins annually – so picking up 91,000 pennies was all in a day’s work."

FOX 5 spoke with Flaten’s former employer over the phone when originally reporting on the story. He said he paid Flaten in U.S. currency and did not want to be a part of the story.