JEFFERSON COUNTY, Colo. - An animal rights activist accused of plotting to have her estranged husband’s love interest killed is now also being accused of having a violent past that includes choking their child, holding a knife to the man’s throat and threatening to drive into a tractor-trailer with one of their kids, according to law enforcement documents.

Jennifer Reba Emmi is currently being held in the Jefferson County jail in Colorado on a $3 million bond.

She was arrested in January on charges of conspiracy to commit murder, retaliation against a victim/witness, stalking, domestic violence, violation of bail bond conditions and violation of a mandatory protection order.

Emmi, 43, of Evergreen, Colorado, founder of The Animal Law Center, allegedly plotted against her husband and his girlfriend with ranch hands. 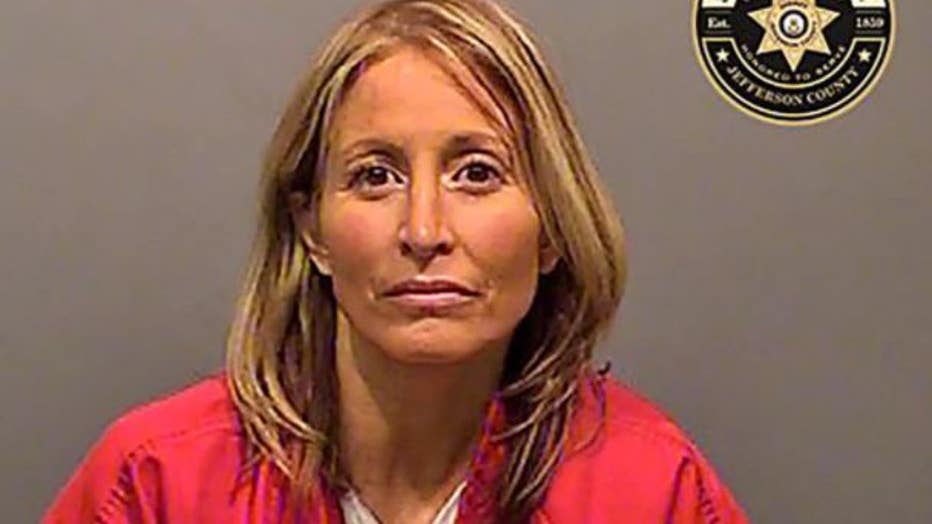 In November 2020, she was accused of seeking 28-year-old worker Timothy Lindsey's help in the killing, according to police.

Law enforcement documents obtained by Fox News say Emmi, who also went by the name Jennifer Edwards, had an alleged history of threatening and violent behavior, including against her children.

In January 2020, Emmi "pulled a knife" on her estranged husband, Donald "Donnie" Emmi, and "put it to his neck" while he was holding one of their children, according to Donnie Emmi’s allegations disclosed in Jefferson County law enforcement documents.

The Emmis had been married for more than a decade and were in the midst of a divorce when several allegations were made. The pair have three young children together.

Donnie Emmi did not respond to a Fox News message seeking comment.

At the time of the alleged incident, Donnie, who had been living separately from Jennifer, was at her home to celebrate his birthday. Donnie said he suspected Jennifer had been drinking because her speech sounded slurred in an earlier phone call, according to court documents.

"While Donnie’s back was to Jennifer, he felt someone grab the hood part of his hooded sweatshirt ...," the documents state. "At the same time, he felt his hair being pulled. Then, he felt a piece of cold metal come across his neck and press into it."

A friend who was also at the home intervened and moved the knife away "from Donnie’s neck," according to a description of what Donnie Emmi told police hours later.

During a recorded phone call soon after, Jennifer allegedly laughed when Donnie said "that Jennifer had a knife to his neck." She allegedly told him that "if she wanted him to be dead, he would be."

A deputy who arrived at Donnie Emmi’s home did not observe any sign of injury to his neck, according to the documents.

In several of his allegations, he describes his estranged wife's mental health and substance abuse issues, particularly involving alcohol. He also told authorities at the time of the alleged knife threat, Jennifer was taking "several medications for a condition called optic neuritis," and he believed she was also suffered from undiagnosed multiple sclerosis.

In Jennifer’s own subsequent statements to Donnie’s brother, she admitted to pointing the knife at Donnie but said "she didn’t hold the knife to Donnie’s neck," documents state.

"Obviously, there are different versions of events from the witnesses that are present. So that's something that will still have to be resolved," Bresee told Fox News.

Bresee added: "The issue of holding a knife and intent to hurt anybody is clearly something that is disputed. With all due respect, just because she has a knife in her hand in the middle of a conversation or an argument does not in any way mean there's the intent to hurt or harm anybody."

It was not the first time the petite Emmi --  who stands 5-foot-4 and weighs 108 pounds -- would be accused of violence.

The next month, her kids told a forensic interviewer their mother had grabbed one of them "by the neck."

"I didn’t think I was going to live," the young child told investigators.

The revelation was made in February 2020, when investigators interviewed the children following the knife incident.

When describing the time when she was choked, Emmi’s daughter recalled how "her mom was blind and she was trying to pick her up and she accidently grabbed [redacted] neck," the documents state.

The child "demonstrated her mom strangling her by placing both of her hands around the front of her own neck," according to the documents.

She recalled: "I couldn’t breathe for a second, then she just put me down … I didn’t tell on her."

Emmi’s daughter also said she didn’t know her mother "was blind." Optic neuritis, the inflammation of the optic nerve, can affect a person’s vision, even if only temporarily.

As the interview continued, the child described how she "couldn’t breathe" and "it really hurt," and, according to investigators, "said her mom accidentally grabbed her neck because she was blind." Emmi then started crying.

The girl told investigators her mother said it was an accident. Donnie Emmi was not at the home at the time and their daughter told police she did not tell him.

When asked about this allegation, Bresee raised the concern of "parental alienation," describing it as "a situation where one of the parents has sole control and access to the children."

"Apparently this is a statement that was made not at the time, but after the fact. One of the children apparently made this statement to law enforcement and, respectfully, it does not necessarily reflect the language that a child would use," Bresee told Fox News. "So that is a concern."

Outside of Emmi’s alleged actions, she also made several threats, and her husband told police he was "fearful of Jennifer committing a murder/suicide and killing him, the kids and herself," according to a police document.

"Donnie is especially concerned about what Jennifer will do if she is arrested again," the document states.

Donnie Emmi alleged that months prior to the police investigation into the knife and choking incidents, Jennifer "threatened to kill" one of their children if he did not help her pay for the ranch.

According to police, Jennifer was driving with one of their kids when the child called Donnie and said, "Daddy, if you don’t help with the ranch, mommy said she’s gonna drive this car into the next tractor trailer."

Jennifer allegedly then took the phone and said: "If I lose something precious … you will too … Clock is ticking for the next tractor trailer," documents state. Investigators believe she was referring to her ranch in describing "something precious."

When asked about the alleged tractor-trailer threat, Bresee questioned the timing of the allegation.

"This was not something that Donnie called and told police" at the time, he said.

Lindsey contacted the Jefferson County Sheriff’s Office on Nov. 2, 2020, and said that hours earlier, Emmi "had asked him to ‘take care of’ the girlfriend of her soon to be ex-husband," the affidavit states.

Lindsey "interpreted Jennifer’s request as she wanted her soon to be ex-husband’s girlfriend killed," according to the 33-page affidavit pertaining to her arrest. He recalled how, during a phone call on that date, she mentioned "taking her out."

"Jennifer asked Timothy if he knew anyone who could ‘help get rid of her – Nobody will miss her," the affidavit continues, describing how Emmi was allegedly referring to the former au pair. When Lindsey asked whether Emmi was referring to both her estranged husband and the woman, she allegedly responded, "Just her."

During a phone call between Lindsey and Emmi later that night, Lindsey asked Emmi if she was serious. She allegedly responded: "I’ll have no regrets." He told her it would cost $2,500 to $5,000.

Emmi later allegedly said: "I’m inclined to kill two birds with one stone so to speak," noting: "He’s the one leading this battle."

She allegedly added: "If there was a car accident or something, then nobody would know."

Bresee told Fox News on Friday that Emmi had been held in the jail’s medical week until this week and "she’s not doing really well." Jail medics have been administering intravenous medicine "because of her eyesight issue," he said, noting that "the fact that the jail is giving her an IV speaks volumes to how serious" her eyesight ailment is.

Bresee also said Emmi does not have "an alcohol problem."

During an exclusive interview with FOX31 Denver, Emmi said she "had always fought for the underdog."

"And now I’m the underdog," she said.

Emmi told the news outlet she had been suffering from a series of medical events and conditions, and was "set up."

"I have been repeatedly set up. All I can say is I want the truth to come out," she said. "The whole thing is crazy. I don’t want to hurt anyone."

Court records show Emmi is scheduled to appear in court on May 7.