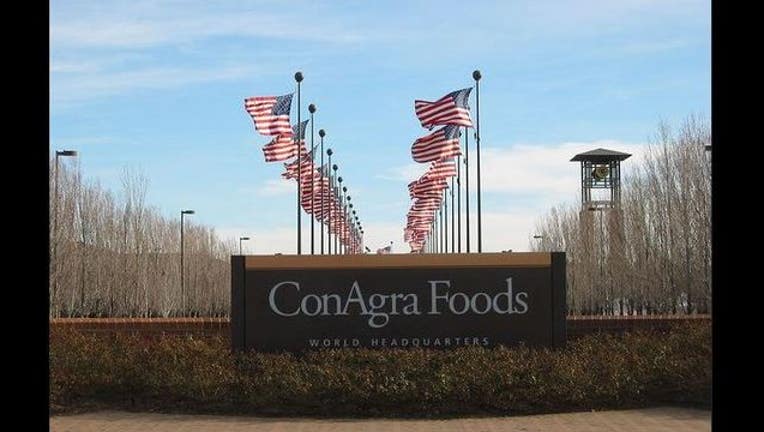 OMAHA, Neb. (AP) — ConAgra Foods will eliminate 1,500 jobs — which represents 30 percent of its office-based workforce — and move its headquarters to Chicago from Omaha, Nebraska, with the goal of creating a more-efficient packaged food company.

Company officials said Thursday that its new Chicago headquarters will have about 700 workers by next summer, including top executives and consumer foods employees that are currently divided between Omaha and Naperville, Illinois. The company will keep about 1,200 employees in Omaha to handle research and development, supply chain management and some administrative functions.

About 1,000 people will lose their jobs in Omaha and roughly 300 Omaha jobs will move to Chicago.

The Naperville office, about an hour southwest of ConAgra's new headquarters in Chicago's Merchandise Mart, will close, and between 320 and 350 jobs from there will move to the city.

ConAgra, which makes Chef Boyardee, Slim Jim and Hebrew National hot dogs, said the job cuts exclude plant positions and do not include any impact from the planned sale of its private label operations. It anticipates about $345 million in one-time charges over the next two to three years related to the restructuring.

"It is critical that we run as lean and as efficient and as effective as possible," ConAgra spokesman Jon Harris said.

The jobs being eliminated are primarily redundant positions or jobs that will be outsourced, ConAgra said Thursday.

The changes should create about $200 million in cost savings, with more than half of that realized by the end of fiscal 2017, according to ConAgra. The balance should be achieved in the following year. The company said the savings are in addition to approximately $150 million in cost cuts over the last two years. It anticipates the plans giving a "modest benefit" to fiscal 2016 earnings.

ConAgra reported a first-quarter loss of $1.2 billion last month. The company has been pressured by a major stockholder, Jana Partners, which says ConAgra's results have been disappointing since it bought Ralcorp for $5 billion two years ago. ConAgra said in June that it will sell the unit so that it can better focus on improving its own name brands.

ConAgra CEO Sean Connolly said it made sense to consolidate operations in Chicago because most of the company's consumer food division was already based in the area. Previously, frozen foods were based in Omaha while other consumer products were in Naperville.

"Today the businesses are split by temperature state," Connolly said. "That doesn't make a lot of sense when you think about how the consumer shops."

Connolly is attempting to sculpt a leaner company that can develop new products to satisfy consumer tastes more quickly while generating healthier profits.

The American palate has shifted rapidly in recent years, with consumers seeking foods that are less processed and healthier.

ConAgra will receive an unspecified amount of tax credits from Illinois based on the salaries of the jobs it plans to move to the state.

Omaha, civic and business leaders have acknowledged that the loss of ConAgra's headquarters will be a blow to the region. Gov. Pete Ricketts and Omaha Mayor Jean Stothert had been in talks with ConAgra about incentive packages to keep the company in the city.

ConAgra was founded in 1919 and moved to Omaha in 1922. It developed its current headquarters complex of five office buildings, research labs and parking along the Missouri River after threatening in 1986 to leave the state for Tennessee.

At that point, Nebraska approved a package of tax incentives and exemptions to keep ConAgra in Omaha, and the city demolished a historic warehouse district to make way for the headquarters.

"I feel like we went to bat for them," Stothert said. "I'm very disappointed that they are leaving."

ConAgra plans to continue using its sprawling campus downtown, but after the cuts are made some of the space might be leased to other businesses, company spokeswoman Lanie Friedman said.

ConAgra has been a major investor in every major community initiative over the years, so losing their headquarters will hurt, said David Brown, president of the Greater Omaha Chamber of Commerce.

But Brown pointed out that Omaha's business community remains strong with four companies listed in the Fortune 500.