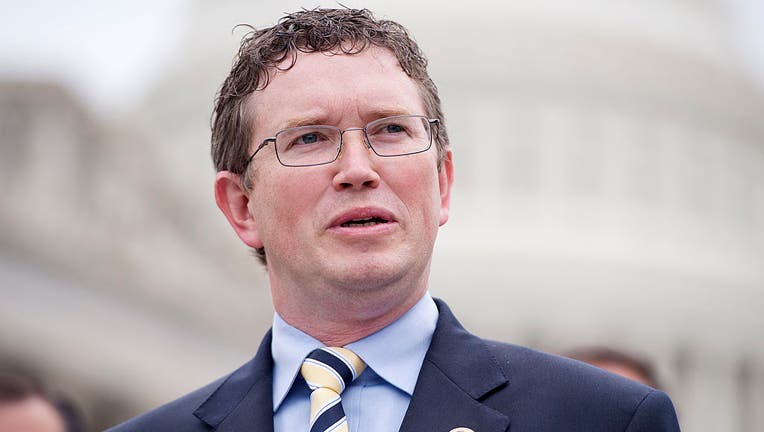 Rep. Thomas Massie, R-Ky., speaks at a news conference at the House Triangle to oppose the Marketplace Fairness Act, also called the internet tax, which would require online retailers to collect a sales tax at the time of a purchase. (Photo By Tom Wi

Rep. Thomas Massie also told a radio interviewer on Thursday that if he were on the jury, he would vote to acquit the teenager if the evidence was based on video he had seen of the melee.

Massie, a libertarian-leaning Republican, defended the Illinois teen, Kyle Rittenhouse. The congressman said he knew more about the 17-year-old’s case than he did about the police shooting of Jacob Blake, an incident that had sparked the protests in Kenosha, Wisconsin.

Massie’s Democratic challenger in the November election, Alexandra Owensby, accused the congressman of continuing to “throw fuel on the fire.”

“When people are being killed in the streets, a representative should never praise the killer,” Owensby said in a statement. “I shouldn’t even have to say this.”

Blake, who is Black, was left paralyzed after an officer shot him in the back several times on Aug. 23. The shooting of Blake, captured on cellphone video, stirred protests that resulted in buildings being burned and vandalized.

Rittenhouse has said he went to the Kenosha protests to protect businesses and people.

“What does it say about our country where this lawlessness is going on to the extent that a 17-year-old feels compelled to stop it?” Massie said during the interview this week with WVHU in West Virginia. “To be the one to turn the tide. I think it says a lot for the 17-year-old.”

On Aug. 25, Rittenhouse fatally shot two protesters who tried to wrest the AR-15 style rifle from the teen, authorities said. One other person was also shot. Rittenhouse, who is white, faces several charges, including first-degree intentional homicide. His attorney says it was self-defense.

Massie referred to video he had seen as the “strongest thing” in support of the teen, saying Rittenhouse was “fulfilling his obligation to retreat” from people chasing and trying to attack him.

The congressman said that Rittenhouse had “exhibited incredible restraint and presence and situational awareness. He didn’t empty a magazine into a crowd.”

Owensby’s statement responded that “no parent wants their child to become radicalized to the point they kill anyone, let alone multiple people.”

“While I disagree with the rioters vandalizing businesses, this in no way justifies youth vigilantes traveling across state lines, illegally arming themselves with assault rifles, and shooting protesters,” the Democratic challenger said. “As a nation, we need to do better.”

Massie represents a solidly Republican district stretching along the northern tier of Kentucky. He defeated a challenger in the state’s GOP primary.

In March, Massie was in the national spotlight when he attempted to force a roll call vote on a massive coronavirus aid package. While his effort failed, Massie’s action forced hundreds of lawmakers to return to the Capitol — potentially exposing them to the virus.