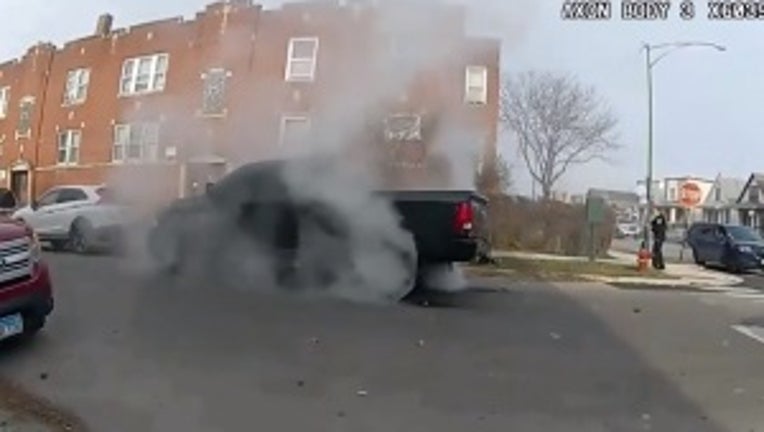 CHICAGO - Chicago’s police oversight agency released body camera video that shows an officer shoot at a gunman who allegedly killed a man during an argument in December on the West Side.

Video of the shooting is obscured by the officer’s vehicle, but shows the officer fire three shots over his squad car door shortly after arriving at the scene Dec. 18.

The suspect, apparently unharmed by the gunfire, evaded police and was not in custody.

In a statement attached to the Wednesday video release, the Civilian Office of Police Accountability said officers were in their vehicle when they saw an altercation between two men in the 1500 Block of North Laramie Avenue.

A motorist tried to drive into the other man, but was subsequently shot in his head by the man he was trying to strike, COPA said.

VIDEO ADVISORY: Graphic content and language can be heard and seen in this video. Viewer discretion is advised.

Chicago’s police oversight agency released body camera video that shows an officer shoot at a gunman who allegedly killed a man during an argument in December on the West Side.

The wounded man then crashed his truck into a parked car. The rear tires of his truck spin wildly, spewing out smoke, as officers surround the car and question if the shooter was still inside the car, the video shows.

Other officers venture down an alley, where one officer suspected the shooter ran, and spend a few minutes searching under and around a porch for the suspect, the video shows.

Despite the search, the suspected shooter remained at large, according to COPA.

The victim of the shooting, 27-year-old Gregory Simmons, died the next day.

An investigation by COPA remained ongoing.