A viral outbreak that began in China has infected more than 31,400 people globally.

The flu-like virus that exploded from China has researchers worldwide once again scrambling to find a vaccine against a surprise health threat, with no guarantee one will arrive in time.

Just days after Chinese scientists shared the genetic map of the culprit coronavirus, researchers at the U.S. National Institutes of Health had engineered a possible key ingredient for a vaccine they hope to begin testing by April.

Scientists from Australia to France, along with a list of biotech and vaccine companies, jumped in the race, pursuing different types of inoculations.

And Texas researchers froze an experimental vaccine developed too late to fight an earlier coronavirus - SARS, or severe acute respiratory syndrome - but are pushing U.S. and Chinese authorities to give it a try this time around. Because the new virus is a close cousin of SARS, it just might protect, said Dr. Peter Hotez of Baylor College of Medicine and Texas Children's Hospital.

All that work is coming at lightning speed compared to past outbreaks. Yet many experts agree it still may take a year - if every step along the way goes well - for any vaccine to be ready for widespread use. That's if it’s even needed by then.

Globally, more than 31,400 people are infected and the death toll has climbed past 630. The overwhelming majority are in China, but more than 310 people with the illness have been reported in over two dozen other countries. 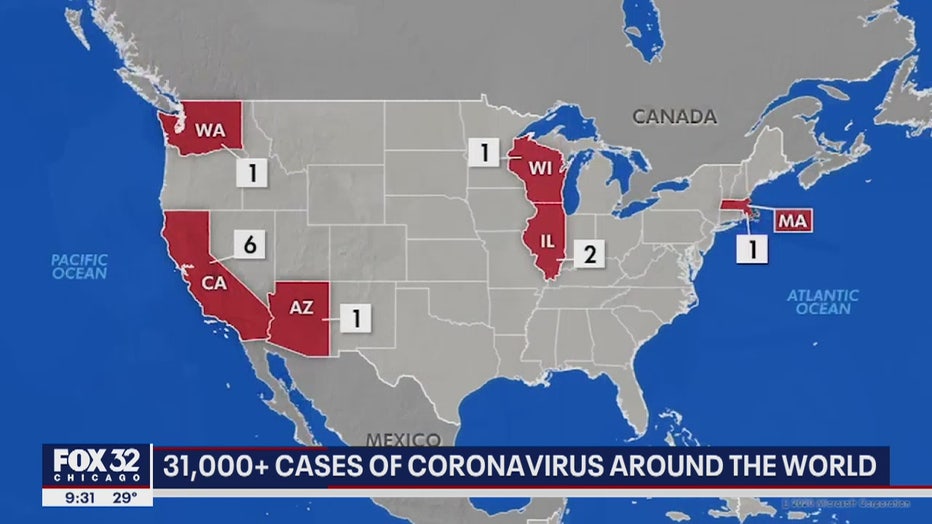 For now, health officials are isolating the sick to fight spread of the virus, which causes fever, cough and in severe cases pneumonia. With no specific treatment, some doctors also are experimenting with antiviral medicines developed for other conditions.

“Ours is already manufactured and could take off pretty quickly,” said Hotez, who created the earlier SARS vaccine with Texas Children’s colleague Maria Elena Bottazzi. But “there’s still no road map for what you do to make a vaccine in the midst of a devastating public health outbreak.”

NIH specialists say rather than chasing outbreaks, it's time to pursue prototype vaccine designs that could work for entire virus families, ready to be pulled off the shelf at the first sign of a new disease.

“We have the technology now. It’s feasible from an engineering and biological standpoint,” said Dr. Barney Graham, deputy director of the National Institute of Allergy and Infectious Diseases' Vaccine Research Center. Without that step, “we’re going to be at risk for new pandemics.”

Traditionally, making vaccines required first growing lots of virus in a lab. The NIH team is pursuing a newer and far faster method: Simply use a piece of the virus’ genetic code, called messenger RNA or mRNA, that instructs cells to make a particular protein.

“We think of RNA as the software of life,” said Dr. Tal Zaks, chief medical officer of Moderna Inc., which is developing mRNA vaccines for other diseases and working with NIH on the new coronavirus.

Inject the right piece and “you’ve taught the body to make its own medicine,” he explained. As cells produce just that protein, the immune system learns to recognize it, primed to attack if the entire virus ever comes along.

The target: A protein aptly named “spike” that lets the virus bind to cells. It studs the surface of coronaviruses - the new one as well as its cousins SARS, which erupted in China in 2002 and spread to 26 countries, and MERS, or Middle East respiratory syndrome, which emerged in 2012.

Graham’s team zeroed in on the RNA responsible for the new virus' production of spike and then - because prior research showed the protein can change shape - engineered a more stable version of it.

Moderna is manufacturing samples of the synthetic mRNA vaccine for NIH to use in animal studies and, hopefully within three months, first-stage safety tests in people. If further testing proves it really works, the hope is scientists could simply swap in a new spike code if another coronavirus comes along.

That’s important because after three such outbreaks in less than 20 years, “this is not the last,” predicted Dr. Mark Denison, a virologist at Vanderbilt University Medical Center. It’s key to find vaccine “strategies that go after these unique things common to every coronavirus.”

WHAT ELSE IS IN THE PIPELINE

Inovio Pharmaceuticals is pursuing a similar approach with synthetic DNA, and recently reported promising results from first-stage testing of a MERS vaccine. It’s collaborating with a Chinese company, Beijing Advaccine, in hopes of being able to test a new vaccine candidate in China later this year.

In France, researchers at the Pasteur Institute are piggybacking on the tried-and-true vaccine against measles. They've had some early success mixing genetic material from other viruses into that vaccine, and now hope to put the immune system on alert against this new coronavirus in the same way.

“The work we're doing now involves making a vaccine against measles but re-engineered in the sense that it has antigens from the new coronavirus,” said virologist Frederic Tangy, head of Pasteur's vaccine innovation department.

What about Hotez’s old SARS vaccine? In that case a piece of the spike protein was genetically engineered and grown in a lab, a classic vaccine technology compared to the newer and less proven Moderna and Inovio approaches. The Texas researchers showed the vaccine protected animals but in 2016 ran out of money for further testing and froze what was left. Every six months, Hotez thaws a small sample to make sure it’s still usable.

Past outbreaks are full of such missed opportunities: There’s no commercial vaccine for MERS even though illnesses still occur. The birth defect-causing Zika outbreak was ending by the time experimental shots were ready to test.

The bright spot: Ebola vaccines. Some candidates began early testing during the massive Ebola epidemic in West Africa in 2014-2016, although the outbreak waned before scientists had proof they worked. But authorities and vaccine companies kept up the research, and by 2018 shots were ready to help tamp down an outbreak still smoldering in Congo.

The World Health Organization will meet next week to identify promising drug and vaccine candidates for the new coronavirus and fast-track their development, much like happened with Ebola.

“To put it bluntly, we’re shadow boxing,” said WHO Director-General Tedros Adhanom Ghebreyesus. "We need to bring this shadow out into the light so that we can attack it properly.”

The latest figures reported by health authorities as of Friday in Beijing:

- China: 636 deaths and 31,161 confirmed cases on the mainland. In addition, Hong Kong has had 22 cases, including one death. Macao has had 10 cases. Most of the deaths have been in central Hubei province, where illnesses from the new type of coronavirus were first detected in December.