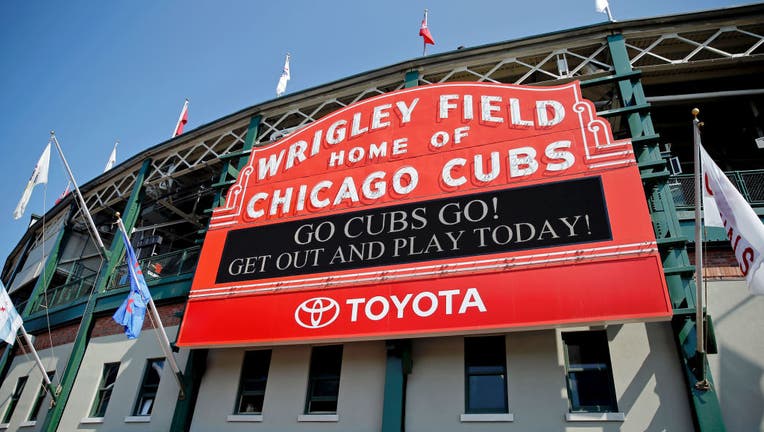 CHICAGO, IL - SEPTEMBER 17: A general view of the marquee at Wrigley Field before the game between the Chicago Cubs and the St. Louis Cardinals on September 17, 2017 in Chicago, Illinois. (Photo by Jon Durr/Getty Images)

CHICAGO - An Illinois appellate court ruled Tuesday a woman struck by a foul ball at Wrigley Field can move ahead with a lawsuit she filed against Major League Baseball.

In upholding a lower court ruling, the appellate court said the plaintiff was not limited to arbitrating her case with Major League Baseball. It noted the arbitration provision was hidden in fine print and couldn’t be appreciated by the plaintiff.

Laiah Zuniga was struck in the face by a foul ball during a 2018 Chicago Cubs game. In the lawsuit filed last year, Zuniga says the ball knocked her unconscious, caused facial fractures and extensive damage to her teeth. She says she was hit because the stadium hadn’t extended netting that protects fans from foul balls all the way down the third base line, where she was sitting.

Professional sports teams have largely been protected from lawsuits. Language on the back of ticket stubs states the ticket holder assumes the risks and dangers that come with attending a game. The assumption of risk has been spelled out on ticket stubs for more than a century.

In its opinion, the court noted the likelihood a ticket holder would see or read the full arbitration provision by accessing a team’s website or visiting its administrative office is diminished further by the minimal effort on the ticket to draw the holder’s attention to the need to do so in order to understand they are agreeing to binding arbitration.

"I think it was a well-reasoned ruling," said Henry Simmons, managing partner of the law firm representing Zuniga, noting a ticket holder is at a disadvantage when it comes to the conditions listed on the ticket stub.

Simmons pointed out the need to go to a team website to learn the terms of the arbitration agreement and finding out that ticket holder option of notifying them within seven days if you rejected the terms.

"It doesn’t make any sense," Simmons said. "That is the reason the court found it unconscionable."

An attorney representing MLB did immediately return telephone calls for comment on the appellate court decision. The appellate court’s ruling can be appealed before the Illinois Supreme Court.

MLB issued recommendations for protective netting or screens in December 2015, encouraging teams to have it in place between the ends of the dugouts closest to home plate. The push for an expansion increased after a series of spectator injuries.

Before the 2018 season, Major League Baseball mandated netting extend to the far end of each dugout.