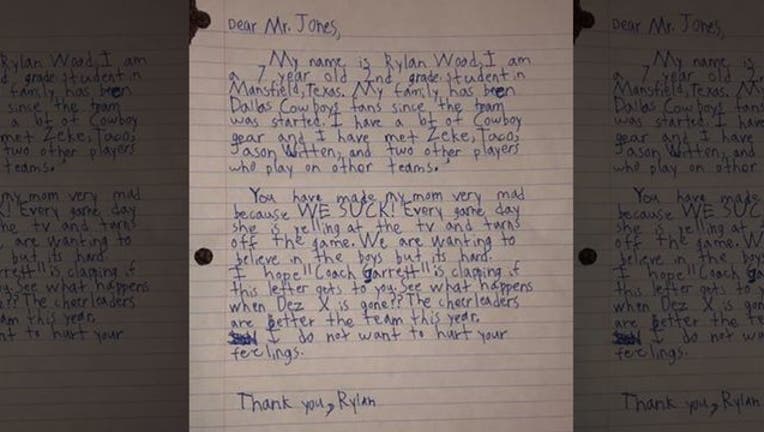 Rylan Wood, 7, writes to Jones that his mom was very mad because "we suck." (Facebook)

FOX News -- The Dallas Cowboys’ loss to the Tennessee Titans this week was apparently the last straw for a young Cowboys fan who decided to share his frustration with Jerry Jones, the owner of what was at least once called America’s Team.

Rylan Wood, a 7-year-old second-grader from Mansfield, Texas, was watching the Monday night game with his mom, Kayla Jimenez, but had to go to bed before it ended because it was a school night.

“He told me if the Cowboys lose, I really want to write a letter,” Jimenez told Dallas-Fort Worth's WFAA-TV.

When Wood woke up the next morning, he heard the bad news. The ‘Boys had lost to the Titans 28-14 in what initially appeared to be a potential blowout win for Dallas midway through the first quarter.

“You have made my mom very mad because WE SUCK!” Rylan writes Jones. “Every game day she is yelling at the TV and turns off the game.”

Jimenez posted her son’s handwritten letter to Facebook before she sent it to Jones. Wood didn’t hold back how he felt about his favorite team’s 3-5 record going into the season’s midway point.

“The cheerleaders are better than the team this year,” Rylan writes before adding, “I do not want to hurt your feelings.”

While there have been no reports that Jones has received the 7-year-old fan’s letter, the owner had stated during a post-game news conference that he noticed his team was “in trouble.”

"We're not in anything if we don't play better," Jones said. "What I recognize is not so much the three wins and five losses but the way we lost this game and the way we played in the game.

"We've got to play better. Our record could be better than it is right now, and we'd still be in trouble."