Chicago parents and community groups are scrambling to prepare for a massive teachers' strike set to begin Thursday, prompting the city to preemptively cancel classes in the nation's third-largest school district.

CHICAGO - Chicago parents and community groups are scrambling to prepare for a massive teachers' strike set to begin Thursday, prompting the city to preemptively cancel classes in the nation's third-largest school district.

The Chicago Teachers Union confirmed Wednesday night that its 25,000 members would not return to their classrooms Thursday after months of negotiation between the union and Chicago Public Schools failed to resolve disputes over pay and benefits, class size and teacher preparation time.

The strike is Chicago's first major walkout by teachers since 2012 and city officials announced early Wednesday that all classes had been canceled for Thursday in hopes of giving more planning time to the parents of more than 300,000 students.

"We want this to be a short strike with an agreement that will benefit our schools and our teachers. We have a ways to go," Chicago Teachers Union President Jesse Sharkey said during a union news conference. "We actually want to see improvement on all the issues we are talking about here."

Mayor Lori Lightfoot said she was disappointed by the union's decision to strike.

"We are offering a historic package on the core issues - salary, staffing and class size," she said Wednesday night at her own news conference, adding that school district negotiators will remain at the bargaining table and that she hopes the union does, too. 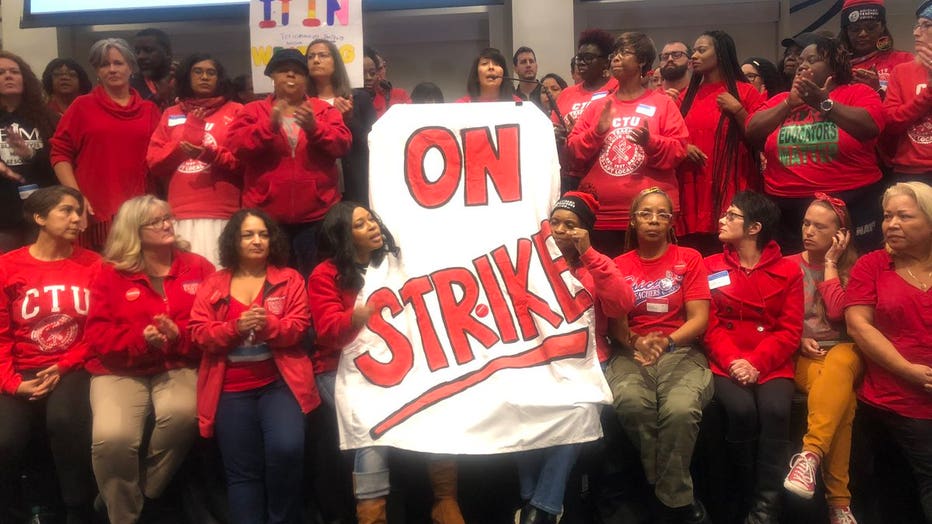 During the 2012 strike, the district kept some schools open for half days during a seven-day walkout. District officials said this time they will keep all buildings open during school hours, staffed by principals and employees who usually work in administrative roles.

Breakfast and lunch will be served, but all after-school activities and school buses are suspended in the district serving more than 300,000 students.

Janice Jackson, the district's CEO, encouraged parents to send their children to the school that they normally attend, however they will be welcome in any district schools.

"We've put together a really comprehensive plan for the students," Jackson said. "We will make sure they are safe and they have a productive day."

Also striking will be 7,000 support staffers, whose union also failed to reach a contract agreement.

Before the strike announcement, June Davis said if teachers walked out, she would likely send her 7-year-old son, Joshua, to his usual elementary school - Smyth Elementary on the city's South Side where almost all students are low-income and minority.

Davis, 38, said she would otherwise have to take her son to his grandmother's in a southern suburb, requiring an hourlong trip on a regional bus line.

"Everybody's hoping they will come to some kind of agreement, find some compromise," Davis said. 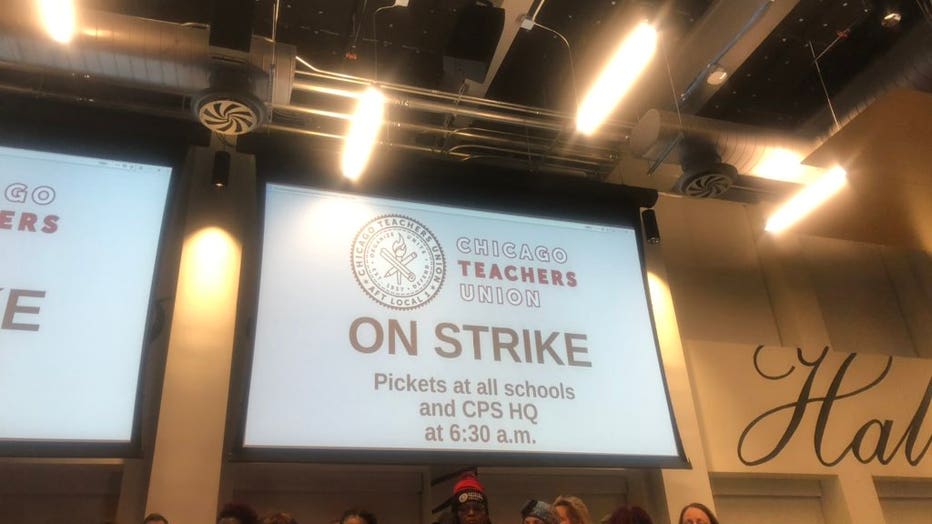 Lightfoot preemptively announced that classes on Thursday would be canceled, saying she wanted to give parents more time to plan. A clearly frustrated Lightfoot said the city had not only offered a 16% pay raise over the five-year contract, but the city also had agreed to put language in the contract addressing "enforceable targets" on class size and increasing staffing levels for positions such as nurses, librarians and social workers - items the union said were critical.

She said the union's demands would cost an unaffordable $2.5 billion per year.

Union leaders disputed Lightfoot's characterization of the city's willingness to concede to their demands on several issues, including class sizes.

"CPS' current class size offer falls far short of what's needed to address the sweeping scale of the problem," they said in a statement. 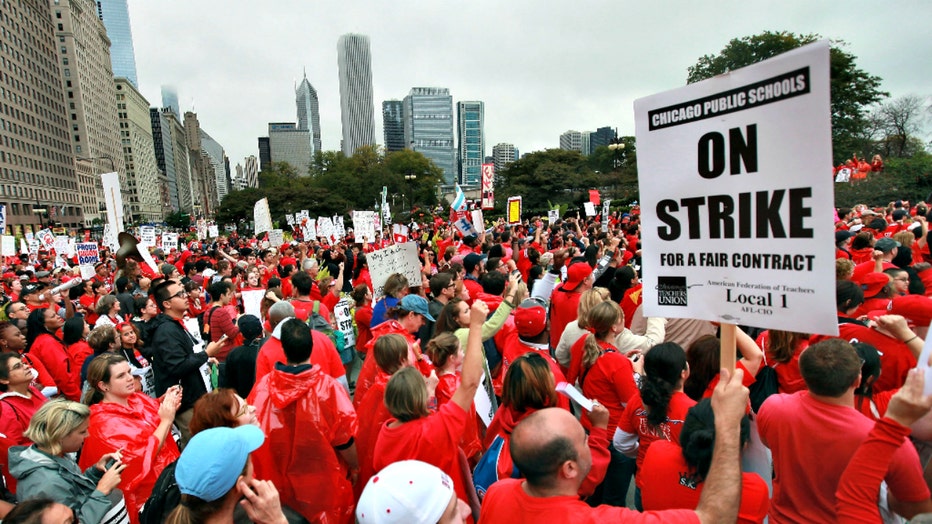 Lightfoot said the city agreed to make substantial changes on some of the union's top priorities, but its negotiators responded by issuing additional demands, including some she deemed unacceptable.

Before heading into a downtown law firm for bargaining talks Wednesday morning, union vice president Stacy Davis Gates said there is a "gross disconnect" between Lightfoot's comments and what negotiators have put in writing.

"To say that you have offered a proposal that respects what we are asking for, to say you've bent over backward ... it's absolutely ridiculous," Davis Gates said.

Community organizations have been preparing for days to welcome students, ranging from a $100 per day camp for elementary school kids at the Shedd Aquarium to all-day programs run by the Boys & Girls Club of Chicago and accessible for a $20 annual membership fee.

Mimi LeClair, president of the Boys & Girls Club of Chicago, said a strike is particularly difficult for single parents and those whose jobs have inflexible schedules.

"It's a horrendous dilemma, deciding between likely losing their job or having their paycheck docked when they rely on every penny or leaving their children home alone," LeClair said.

The city's public libraries also are planning programs for students, along with a network of churches and community centers that are part of the city's Safe Haven program intended to give kids a safe place during the summer months particularly on the city's South and West sides.

The YMCA of Metro Chicago expects highest demand for its all-day programs for children between the ages of 5 and 12, who are too young to stay home alone but whose parents may oppose sending them to schools unstaffed by teachers.

Here are some of the issues behind the school district's second strike in seven years:

WHAT KIND OF MONEY ARE THE TEACHERS LOOKING FOR AND WHAT KIND OF RAISE IS THE CITY OFFERING?

The city has offered 16% raises for the teachers over a five-year contract and calls for the teachers' health care costs not to increase for three years. The city says that's a pretty good deal for teachers, whose starting annual salary of just under $53,000 is higher than the salary for teachers in any other school district in the state. But the union, which is asking for a 15% raise over three years, says its analysis shows teachers at the end of the contract will make about $15,000 less than the city says they will. The union also said the contract leaves unclear just how much health care costs will increase during the final two years.

At first blush, it seems like a pretty good deal: a 16% raise over five years. But the teachers' union sees a potential trap. Teachers say if they take the raise, they lose negotiating leverage as they demand more school nurses, social workers, librarians and smaller classrooms because those are not the kinds of things they can legally strike over. The union knows about the city's vow to add at least 200 social worker positions and at least 250 full-time nurse positions but has made it clear that the only way to make sure the city follows through on its promises is to put it in writing in the next contract.

WHY NOT JUST INCLUDE STAFFING REQUIREMENTS IN THE CONTRACT?

Until this week, the city wanted nothing to do with adding staffing requirements to the collective bargaining agreement, saying it would make it tougher for principals to run their individual schools because it would require them to use a chunk of their budgets to fill those positions at the expense of the "needs and desires of the local community or school." But this week the CPS and city announced a willingness to write into the contract language that would address class sizes and staffing issues. That's potentially good news to the union, which has made it clear that any deal must address staffing shortages and overcrowded classrooms.

JUST HOW CROWDED ARE THE CLASSES?

It depends on who you ask. The school district contends that 80% of the kindergarten to third-grade classes made the 28-student maximum and 90% of the fourth- to eighth-grade classes met the 31-student maximum. The union estimates that a quarter of the city's elementary school students are in overcrowded classrooms. That disagreement is partly why the union wants a contract provision that calls for teachers to receive an extra $5 a day per student whenever their classes exceed the mandated size limit. The union also is pushing for smaller class sizes. The district says that would require the hiring of another 1,150 teachers and 1,000 teacher assistants at a cost of at least $225 million annually.

WHY ARE NURSES, LIBRARIANS, SOCIAL WORKERS, AND COUNSELORS SUCH A STICKING POINT?

There is no disputing the fact that the school district needs more people on those jobs. According to the union, about one-fifth of the district-run schools have librarians. And as scarce as they are citywide, the union says they are even harder to find in schools where most students are black. As for nurses, both the union and the school district agree many more are needed, though they can't agree on how many are currently working in the district. The union wants contract language that spells out that people will only be asked to do the jobs for which they are hired. It also has expressed concern about the number of students currently assigned to counselors and about various roles counselors are expected to fill, including as substitute teachers and lunchroom help.

WHAT IS THE DEBATE OVER AFFORDABLE HOUSING ABOUT?

Chicago is an expensive place to live and the way the union sees it, too expensive for some teachers and way too expensive for teaching assistants, clerks and other support staff. Like other city employees, teachers are required to live in Chicago and the union said that if police officers and firefighters receive housing subsidies, they should also get them. They want language in the contract that would call for the school district to provide housing assistance for new teachers and others, and to help students' families who are at risk of losing their housing. Mayor Lori Lightfoot agrees affordable housing is an important issue but a collective bargaining agreement between the teachers and the city isn't the place to solve it.