OAKLAND, Calif. - More passengers were allowed to methodically disembark the Princess cruise now docked at the Port of Oakland on Tuesday, the second day of the disembarkment process.

In all, about 1,500 passengers will be allowed to get off the boat, where they have been for 17 days.

Streams of passengers were seen walking down the exit ramp, all in masks, and then being ushered into tents where they were questioned and screened after 21 people on board have already tested positive for coronavirus.

One woman, still in a bright green cruise-wear top, gave a fist pump high in the sky.

Mary Lou Wilson, 77, of Pleasanton, was one of those lucky ones who was finally able to touch land early Tuesday afternoon.

Speaking by phone from the ship earlier in the morning, Wilson said she had been on the cruise line since Feb. 21 and in quarantine for six days.

"We're not allowed out of our rooms," she said, adding that all meals have been dropped off at her door throughout the coronavirus scare. "The crew have been so good to us. They're feeding us well. I can't imagine what the workers are going through." 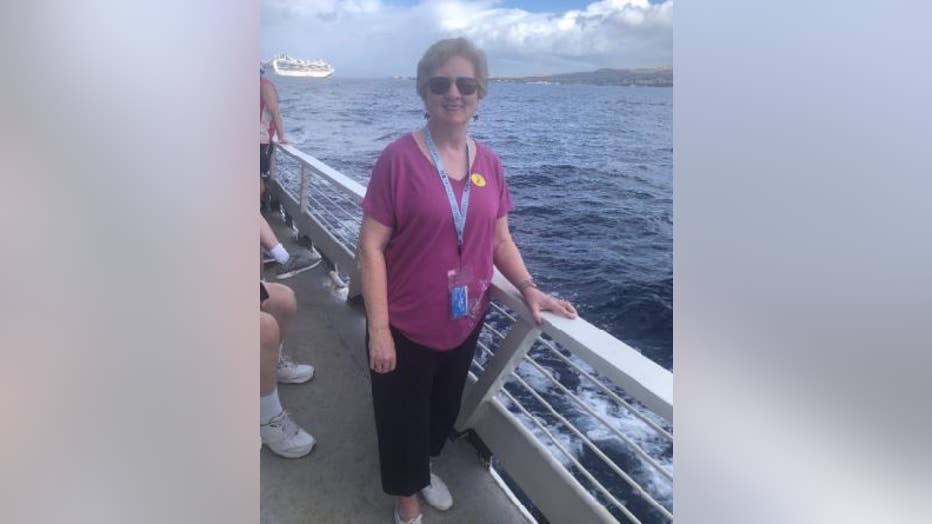 Mary Lou Wilson, 77, of Pleasanton is on her first cruise.

Still, the first-time cruiser passenger said she was doing OK.

"I have a balcony room so I'm getting a lot of fresh air," Wilson said. "I'm taking a lot of pictures. They've brought us about 500 movies. I've read three books."

And she said her friends of four decades are in rooms next to her.

"We're Face-timing and calling and texting each other all the time," Wilson said. "We're trying to keep ourselves busy. We're laughing and having a lot of fun."

Wilson said this whole experience has been an unprecedented wild adventure.

Her husband died recently and her longtime pals convinced her to go on a cruise for the first time in her life. She said she had a blast for the first nine days in Hawaii and even now, "everyone has been keeping my spirits up."

Her son and family live in the Bay Area and family all over the country have been calling her and texting her to keep her company.

As for feeling sick or phantom coronavirus symptoms?

Not everyone has been so fortunate as Wilson.

Thirty people who needed acute medical care, some who tested positively for coronavirus, had been taken off the ship by late Monday afternoon, said Shawn Boyd, a spokesman for the California Office of Emergency Services.

In addition, 500 passengers in all got off the boat on Monday, including 230 Canadians and 270 Californias. Of those, about 150 California passengers went by bus to Travis Air Force Base in Fairfield, where they will be asked if they want to be tested and quarantined, officials said.

Wilson and the second batch of passengers were headed to Travis  AFB on Tuesday as well.

A letter from the cruise ship said that passengers may choose to be tested for COVID-19.

The Travis AFB passengers are being housed at the Westwind Inn, which is located at the military base as well as at a collection of family apartments that are nearby. Their temperatures will be taken twice daily. If symptoms develop, they will be transferred off base to a civilian hospital.

This is the same hotel that was used for quarantine for the past month and a half for American evacuees from Wuhan, China and then from a Princess cruise ship in Japan. The last 140 people from that quarantine were cleared a week ago.

Eventually, all the U.S. passengers will be flown or bused from the port — chosen for its proximity to an airport and a military base — to bases in California, Texas and Georgia for testing and a 14-day quarantine.

The ship is carrying people from 54 countries, and foreigners will be whisked home.

About 1,100 crew members, 19 of whom have tested positive for COVID-19, will be quarantined and treated aboard the ship, which will dock elsewhere after passengers are unloaded, California Gov. Gavin Newsom has said.

The ship had been held at sea for about five days, as officials fretted about what to do with those on board who had tested positive for coronavirus.

Oakland was chosen as the "best site" for disembarkment, the governor's office said, because the port is not full of tourists, like San Francisco, and the water there is deep enough, unlike in Alameda.

1,500 passengers get to disembark

In all, about 1,500 passengers will be allowed to get off the boat, where they have been for 17 days. Allie Rasmus reports 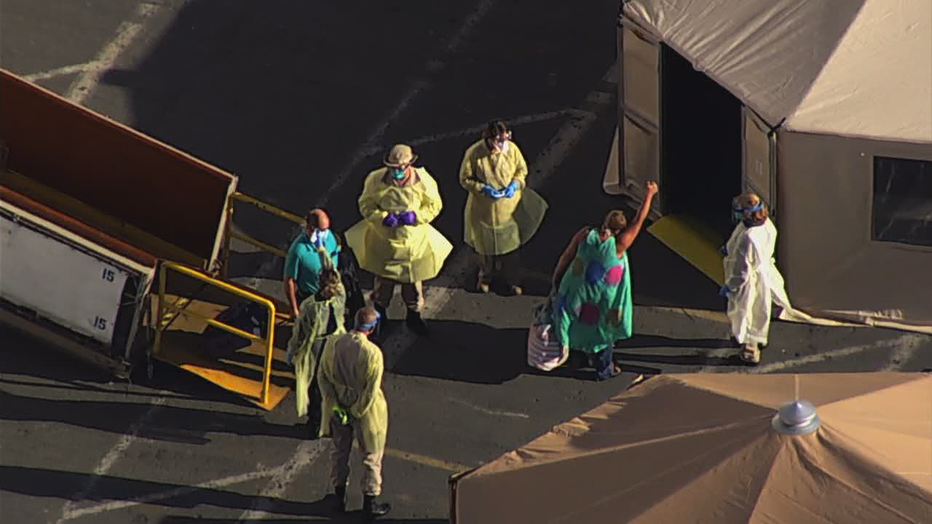 A passenger on the Grand Princess gives a thumbs up as she exits the cruise ship in Oakland. March 20, 2020 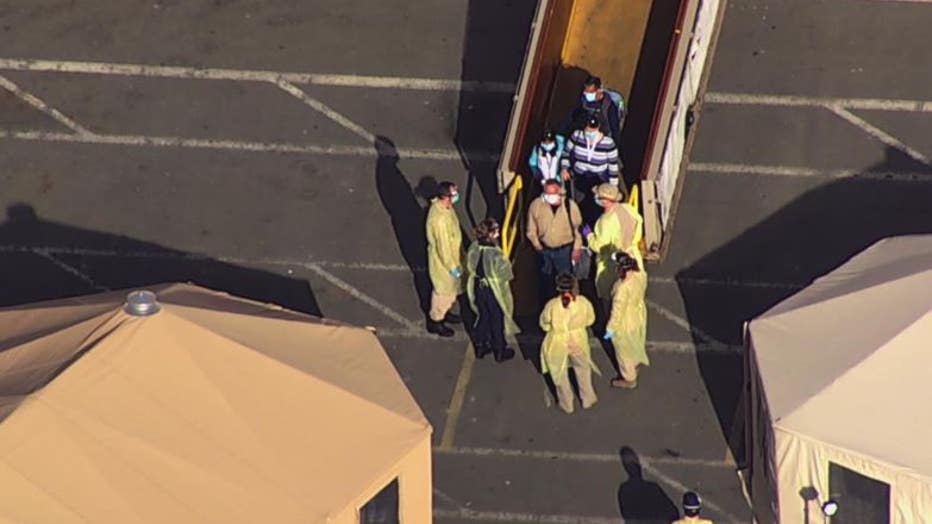 Passengers are wearing masks as the disembark for the second day off the Grand Princess in Oakland. March 10, 2020 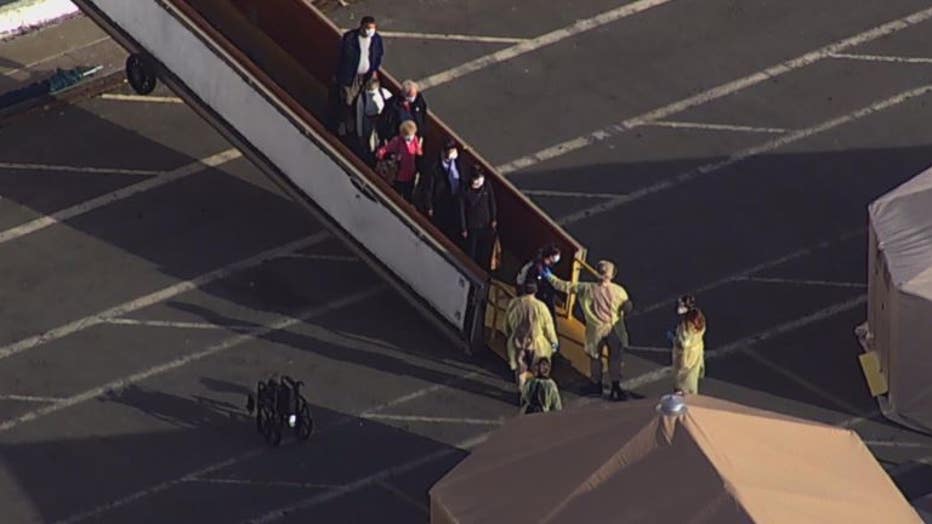 More passengers are now disembarking from the Grand Princess today docked at the Port of Oakland. March 10, 2020 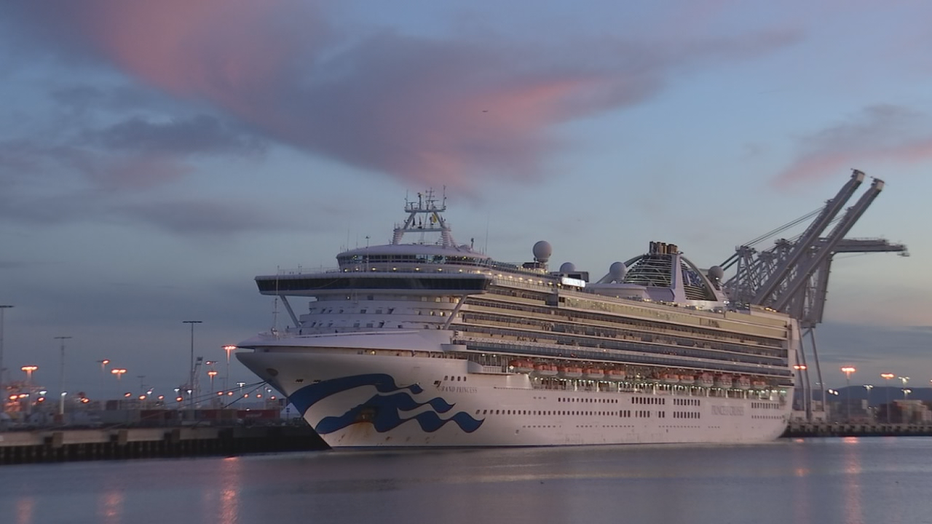 Coronavirus: County-by-county breakdown of confirmed cases in the Bay Area

The Associated Press and KTVU's Debora Villalon contributed to this report. Lisa Fernandez is a reporter for KTVU. Email Lisa at lisa.fernandez@foxtv.com or call her at 510-874-0139. Or follow her on Twitter @ljfernandez