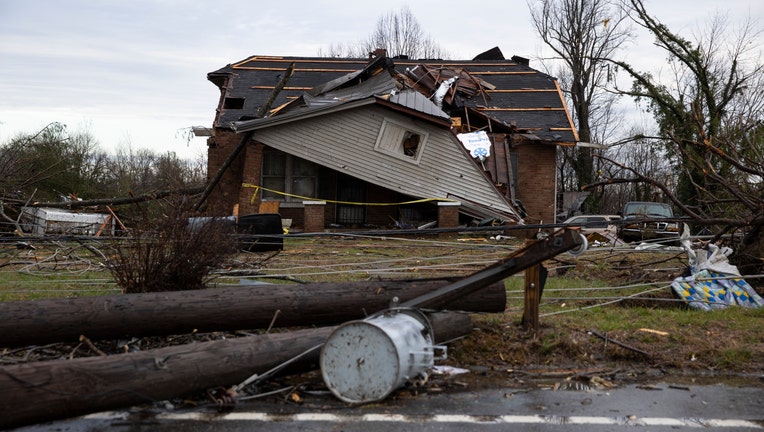 COOKEVILLE, TN - MARCH 03: A home is shown destroyed by high winds from one of several tornadoes that tore through the state overnight on March 3, 2020 in Cookeville, Tennessee. At least eight people were killed and scores more injured in the storms

NASHVILLE, Tenn. - Rescuers searched through shattered Tennessee neighborhoods for bodies Tuesday, less than a day after tornadoes ripped across Nashville and other parts of the state as families slept. At least 24 people were killed, some in their beds, authorities said.

The twisters that struck in the hours after midnight shredded more than 140 buildings and buried people in piles of rubble and wrecked basements. The storms moved so quickly that many people in their path could not flee to safer areas.

"It hit so fast, a lot of folks didn't have time to take shelter," Putnam County Mayor Randy Porter said. "Many of these folks were sleeping."

The governor declared an emergency and sent the National Guard to help with search-and-rescue efforts. State emergency officials, who initially reported at least 25 dead, revised the toll to 24 fatalities on Tuesday evening after determining one death counted earlier was not storm-related.

An unspecified number of people were missing.

Early findings by National Weather Service survey teams indicated that the damage in Nashville and Wilson County to the east was inflicted by a tornado of at least EF-3 intensity, the agency said.

One twister wrecked homes and businesses across a 10-mile (16 kilometer) stretch of Nashville that included parts of downtown. It smashed more than three dozen buildings, including destroying the tower and stained glass of a historic church. Another tornado damaged more than 100 structures along a 2-mile (3.2-kilometer) path of destruction in Putnam County, wiping some homes from their foundations and depositing the wreckage far away. 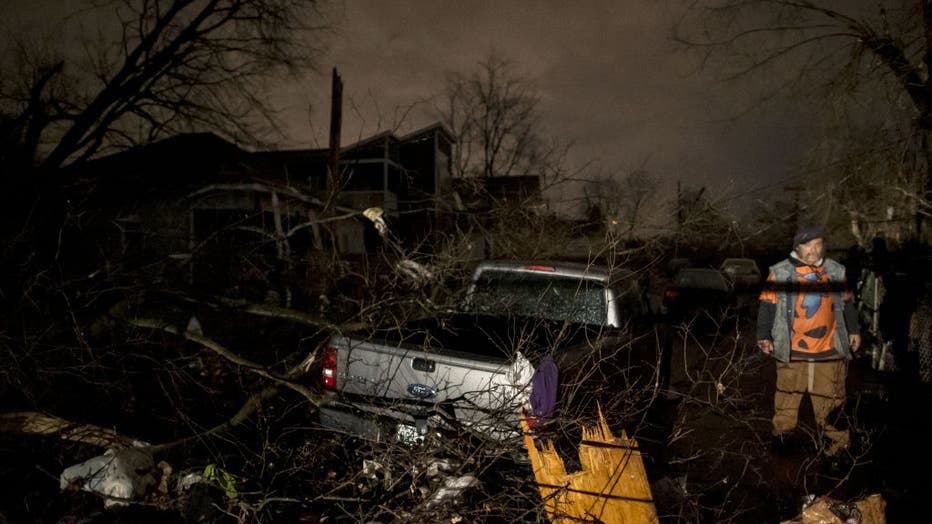 NASHVILLE, TN - MARCH 03: A man walks by a storm damaged pickup truck on Underwood St. on March 3, 2020 in Nashville, Tennessee. A tornado passed through Nashville just after midnight leaving a wake of damage in its path including two people killed i

In Putnam County, 80 miles (some 130 kilometers) east of Nashville, houses and businesses were completely flattened. In one neighborhood, volunteers found five bodies. Neighbors and sheriff's officers were still looking for two more. Later, authorities imposed an 8 p.m.-8 a.m. curfew in the county and reported one looting arrest.

Nashville residents walked around on streets and sidewalks littered with debris, in neighborhoods where missing walls and roofs left living rooms and kitchens exposed. Mangled power lines and broken trees came to rest on cars, streets and piles of rubble.

"We are resilient and we're going to rebuild," Nashville Mayor John Cooper said.

During Gov. Bill Lee's tour of Putnam County, homeowners dug through debris, trying to salvage any items not destroyed. One young woman held up a clean green blouse while standing on a second floor of a home that had no roof. 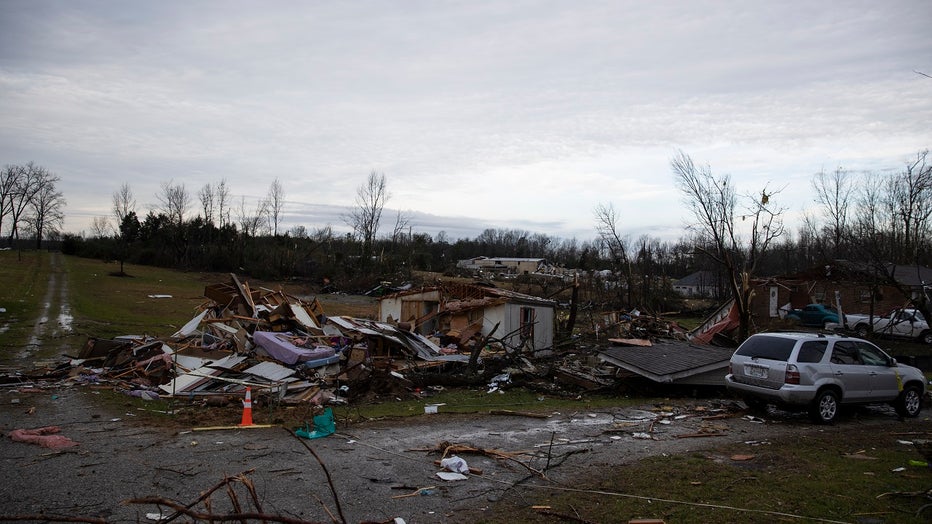 COOKEVILLE, TN - MARCH 03: A home is shown destroyed by high winds from one of several tornadoes that tore through the state overnight on March 3, 2020 in Cookeville, Tennessee. At least eight people were killed and scores more injured in the storms

In Nashville, the twister's path was mostly north and east of the heart of downtown, sparing many of the city's biggest tourism draws -- the honky tonks of Broadway, the Grand Ole Opry House, the storied Ryman Auditorium and the convention center.

Instead the storm tore through the largely African American areas of Bordeaux and North Nashville as well as neighborhoods transformed by a recent building boom. Germantown and East Nashville are two of the city's trendiest hotspots, with restaurants, music venues, high-end apartment complexes and rising home prices threatening to drive out longtime residents.

"The dogs started barking before the sirens went off. They knew what was coming," said Paula Wade, of East Nashville. "Then we heard the roar ... Something made me just sit straight up in bed, and something came through the window right above my head. If I hadn't moved, I would've gotten a face full of glass."

The roof came crashing down on Ronald Baldwin and Harry Nahay in the bedroom of their one-story brick home in East Nashville. "We couldn't get out," Baldwin said. "And so I just kept kicking and kicking until we finally made a hole."

The roaring wind woke Evan and Carlie Peters, also in East Nashville, but they had no time to reach the relative safety of an interior bathroom. 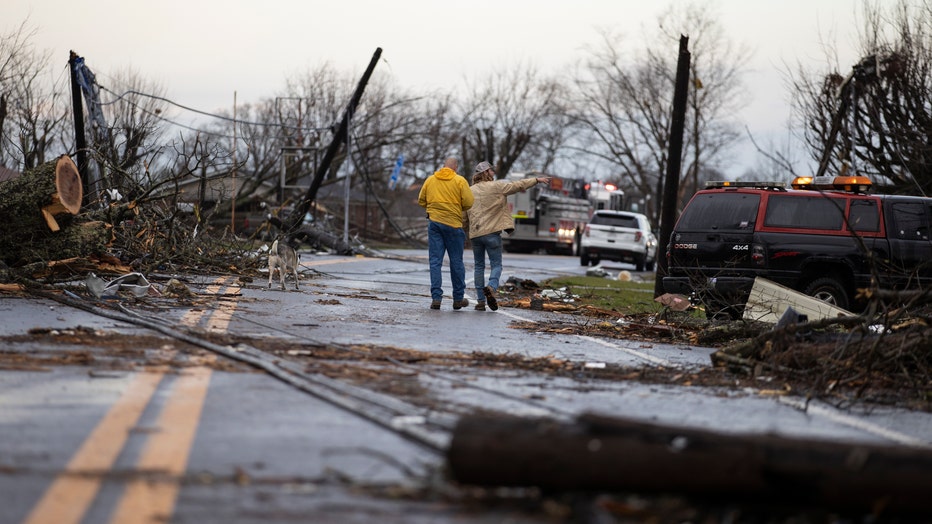 COOKEVILLE, TN - MARCH 03: Residents walk through downed utility lines and trees to survey damage caused by one of several tornadoes that tore through the state overnight on March 3, 2020 in Cookeville, Tennessee. At least eight people were killed an

With more than a dozen Super Tuesday polling places in Nashville's Davidson County damaged, voters were sent to other locations, some of them with long lines. Election officials in Putnam County advised voters in eight precincts with damaged polling locations to vote at the main election office in Cookeville.

Lee said he observed numerous examples of people coming together to help one another. "In the worst of circumstances, the best of people comes out, and that's what we're seeing," he said.

Just as the governor stopped by to tour the devastation in Putnam County, a van of longtime customers at a local eatery -- who proudly stated they ate there every morning -- arrived to help clear debris.

In the small town of Baxter, Mike Stephens was awakened when a big tree crashed through the roof of his house. He started cleaning up as soon as the sun rose. He cut up one tree and had help from a neighbor with a backhoe and a man who stopped by with a chainsaw.

Wayne Stephens, a technician at a local car dealership, had Tuesday off from his job. With no damage to his home, he got in his truck with his chainsaw. He's not related to Mike Stephens and had never met him. He said he only wanted to help "as much as I can."