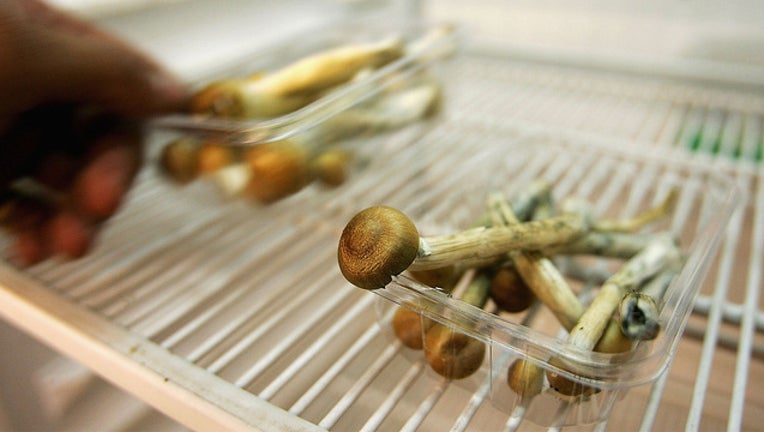 DENVER (AP) - Voters decide this week whether Denver will become the first U.S. city to decriminalize the use of psilocybin, the psychedelic substance in "magic mushrooms."

A citizen-led initiative appearing on ballots Tuesday follows a path that led to marijuana's legalization in Denver and later in Colorado. Campaign organizers, though, say their only goal is to prevent people from going to jail for possessing or using mushrooms.

Here's a look at the effort and the history of the drug:

WHAT ARE "MAGIC MUSHROOMS"?

Varieties that contain psilocybin are often referred to as "magic mushrooms." The psychedelic substance, federally illegal since 1968, became more commonly associated with recreational use than medical purposes. Legendary rock bands like the Grateful Dead and Allman Brothers Band frequently used images of mushrooms in their logos, T-shirts and other paraphernalia.

The federal government still classifies psilocybin as a Schedule I drug, defined as having no medical purpose and a high potential for abuse. The decision stymied research into its medical use for decades but small studies have resumed in recent years.

IS IT SAFE TO USE MUSHROOMS?

Medical researchers have found the substance can help treat anxiety and depression in cancer patients. Those studies were small and closely supervised but the preliminary results gave researchers hope that psychedelic drugs could be used to treat cancer anxiety and post-traumatic stress disorder.

But researchers warn that psilocybin should only be used under medical supervision and can have negative effects, including anxiety and paranoia.

WHY DO PEOPLE USE THEM RECREATIONALLY?

Psilocybin is among the substances described as psychedelics or hallucinogens. Researchers say they have been used in religious practices for decades for their effects on users' perceptions and spiritual experiences. The effects also appealed to recreational users, whose 1960s "hippie" culture continues to dog researchers seeking funding for medical work on psilocybin and other substances.

WHAT ARE DENVER VOTERS BEING ASKED?

Denver's initiative would effectively decriminalize use or possession of psilocybin by people 21 and older, making it the lowest enforcement priority for local police and prosecutors. The proposed ordinance also prevents city funds from being used for criminal penalties on possession or use and creates a panel of officials to study the effects of the change.

The initiative does not legalize psilocybin or permit its sale by Denver's cannabis businesses.

WHO OPPOSES THE IDEA?

The city's mayor and district attorney have publicly opposed the proposal. District Attorney Beth McCann, whose office handles all criminal charges in Denver, has said she appreciates the inclusion of a panel to study the effects of the change. But there is almost no organized opposition to the pro-psilocybin campaign, Decriminalize Denver.

HOW OFTEN ARE PEOPLE PROSECUTED NOW FOR MUSHROOM USE OR POSSESSION?

According to McCann's office, only 11 of more than 9,000 drug cases referred for possible prosecution between 2016 and 2018 involved psilocybin. Prosecutors filed charges of possession with intent to manufacture or distribute in three of those cases.

HAVE THERE BEEN SIMILAR CAMPAIGNS ELSEWHERE?

A California effort to decriminalize the use, possession, growth, sale and transportation of psilocybin failed to qualify for the statewide ballot in 2018. Organizers in Oregon are trying to gather enough support to put a similar initiative to a statewide vote in 2020. Voters in California, Colorado and Oregon all have voted in favor of broadly allowing marijuana use in recent years, both for medical and personal use.